The Price of Being an Invisible Woman 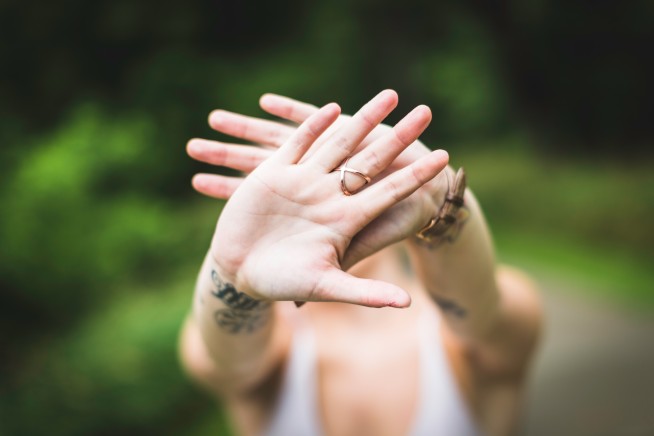 As a child, I dreamed of the day I would grow into womanhood. I knew I would be beautiful and I couldn’t wait to be seen and admired in the body that was waiting for me.

At twelve, there it was, right on schedule – the cusp of adulthood that brought me my new body and the beauty I had so longed for. Unfortunately, it came with an unexpected price: unwanted attention from my male classmates.

Every day at school, I was sexually harassed, bullied or assaulted. Boys catcalled me, snapped my bra, pulled my skirt up, and corralled me into corners where they stripped me of my jacket, sweater and shoes. When I protested, they laughed and called me a prude. Once, I slapped a boy across the face for touching me inappropriately – and he slapped me right back.

I learned early on that beauty was dangerous. Being pretty was like an invitation to my male classmates to treat me however they liked and use me for their own amusement. Any sense of having physical boundaries and ownership over my own body disappeared.

In response to this, I gained fifty pounds and developed severe acne. It was, I believed, the only way to ensure my physical and emotional safety. Sure enough, the boys left me alone, except for an occasional insult about my weight or skin. It seemed worth it, at the time. I didn’t realize until later what I had actually given up.

When you give up the desire to be seen, you give up on your life. @yancylael (Click to Tweet!)

What I really gave up was the right – and desire – to be seen. I decided, instead, to become invisible, blend into the walls (quite literally) and hide all evidence that I was a living, breathing human being.

As a result of this choice, I struggled through college, switching schools and dropping out over and over, every time I felt too exposed. I kept to myself and avoided my friends, an action which caused me to miss out on countless experiences of joy and community. I even gave up on the idea of having a romantic partner – after all, you cannot experience intimacy when you refuse to let yourself be seen and recognized.

My life became smaller and smaller, as I attempted to manage and control my experiences in the outside world. Even all those years later, I was still afraid that any attention I received, any notice I drew would be dangerous and threatening, as it had been when I was a young teenager.

I believe all women have experienced this to some extent and so many of us have turned to invisibility as a remedy. In fact, we have often invited it in, quite deliberately, erasing ourselves from the tableau of our lives.

It seems easier and safer in the moment we make the decision. But in the end, we find out that the price of invisibility is far higher than we ever could have imagined.

1. You’ll never get what you want.

It’s that simple. You won’t allow yourself to be seen (which means you aren’t fully engaging with people or life, in general) and therefore, what you want stays as invisible as you do.

You’ll pick the mediocre boyfriend who can’t commit, the job that requires you to work overtime for no pay and when it comes to dessert, you’ll accept a stale Oreo rather than ask for the tiramisu. Upholding boundaries and standards for yourself requires you to be seen.

People will notice you no matter how determined you are to remain invisible. Knowing this, you will skip out on your morning walk if you hear the neighbors working in their yard, or decide not to go on that spa retreat in Santa Fe with your friends. All these experiences, from the small to the large, are the moments that make up your life. Without them, what kind of memories will you have to look back on?

4. Other people will take advantage of you.

Of course they will. You have no discernible boundaries and humans tend to gravitate toward the people with the least resistance. But hey, if you’re okay with that…

This may be the worst of all the consequences to invisibility. The pain of not being able to be yourself is piercing. It alters the way you dress, speak and express yourself and dictates the choices you make in day-to-day life. In the end, you realize the life you are living is not yours – it’s the life of a phantom woman, one who doesn’t exist and whose life was created by external forces.

Allowing Yourself to Be Seen

Eventually, the price of being invisible becomes too high. We see our lives passing us by and we know we have to take a stand. That moment came gently for me, as I ventured into volunteer work, desperate for a way to help me feel more connected to my life and the people around me. Every step was awkward and painful, and for a long time, it seemed like nothing was changing.

I persevered thanks to friends and family who kept nudging me along, as well as a deep knowing in my heart that I could not go on being invisible. When I made a commitment to myself to complete my master’s degree, I finally reached the tipping point. Change came rapidly in the form of weight loss and skin that was finally healing. I began to understand that life was all about taking risks – and allowing myself to be seen was the greatest and most rewarding risk of all.

A year after I completed my master’s degree, I treated myself to a trip to Paris, where my traveling companion kept pulling out his camera and snapping photographs of me. “I can’t stop taking pictures of you,” he said. “You’re glowing.” That’s when I knew I had finally allowed the world to see me and that I didn’t have to be afraid of the attention.

It is not easy to shed the Invisible Woman. The fears that brought her into existence will always rise up, challenging the shift over and over again. But being invisible is not our destiny. What the world needs more than anything is women who can stand strong in their own skin, knowing they are worthy of being seen.

What can you do today to allow yourself to be seen?

Yancy Lael is the author of the indie self-help hit, Glowing: Soulful Skincare and a novel, The Poison Box, as well as the creator of She Came Into Focus, a deeply intuitive course that explores women’s self-image through the mediums of storytelling and photography. You can connect with her at www.yancylael.com or on Facebook and Twitter.