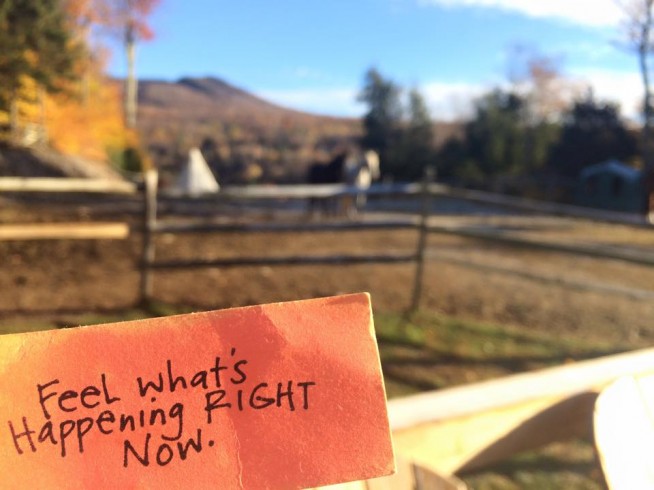 I woke up and it all felt like a dream. My whole life.

Lying in bed, the smell of coffee as exciting as anything in the world and I wonder “Who is to say what’s real and what isn’t?”

I was at a nail salon the other day in Waterbury, Vermont. My writing and yoga retreat hadn’t started yet. A Vietnamese man who looked like he worked at the tattoo parlor next door massaged my feet with his eyes closed and a precision I’ve seen on the faces of guitar players. There was an old woman with white hair, whom I assumed worked there, laying on a fake leather sofa, shaking her feet in leopard socks, bright zebra pants, watching an iPad as she leaned over the arm of the sofa sucking chicken bones.

The woman who owned the salon told me that the old woman on the sofa was her mother.

“I just found her after forty-three years,” she said.

“Do you want to see the video?”

She pulled up a video on YouTube of a news clip which showed “Waterbury woman reunited with mother after forty-three years.”

Her mother left her in Vietnam when she was three and moved to the U.S. Forty-three years she searched for her. She finally came to the States and still had no idea where her mother was. The rocker looking dude who did my toes and blue nails was her husband.

When I asked her how she finally found her mom she said,”Facebook.”

(And yes, this woman is now my Facebook friend.)

I don’t quite understand what happened. How the old woman left her daughter all those years ago and didn’t search for her. How the daughter wasn’t angry. But it wasn’t my story to understand. I was moved by it. I stayed and talked to them all for a long time, asking questions and wiping tears away.

I was changed. It wasn’t my story but I was altered. Isn’t that what happens?

Who’s to say what it is real? Maybe I dreamt all of it? But if that’s so, then I’d like to personally thank my imagination because it’s doing one hell of a job.

Today I’m going to stop questioning, “Is this real? Will this end? Is this all a dream?” And instead I will say: “Is this love?”

Even if it is all a dream – you are in it. You’ve created it. @JenPastiloff (Click to Tweet!)

In your bones. In your most you place. Feel it. Be unflinching. Don’t turn away. Step outside. Breathe. Get up on the horse. Again and again. Look up at the sky until your eyes disappear and all you have left is how you feel. All you have left is this sun on your face, this feeling of being alive.

I will see you next in St. Louis on Nov 7th! It will be my first time there so I hope to see a lot of Pos Pos peeps there!! I will also be in Tampa and Vancouver in January. Make sure to give me a hug if you come. All other workshops here.  Also, my New Year’s Retreat in Ojai, Calif is almost sold out so book now here! I will be back at Kripalu in Feb, too. Join me on instagram at @jenpastiloff and @GirlPowerYouAreEnough. xoxo

Jen leads retreats that are a combo of yoga/writing and for ALL levels. Read this post to understand. Click here for all retreat listings and workshops to attend one in a city near you (Atlanta, NYC, St. Louis, London, Chicago & more, are next). Jen is the guest speaker 3 times a year at Canyon Ranch and leads an annual retreat to Kripalu Center for Yoga & Health every February, as well as an annual invite only retreat to Tuscany. She is the founder of the popular The Manifest-Station website. Follow her on Instagram and Twitter. She is the founder of Girl Power: You Are Enough.