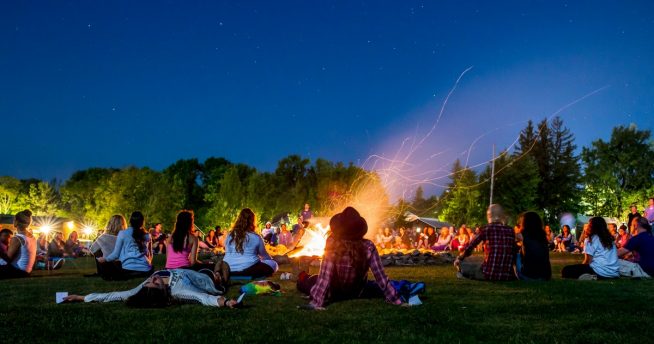 I grew up going away to camp every summer. Early June would be spent camp shopping, browsing the aisles for the latest Brine lacrosse shorts, Neutrogena brown face wash and Clinique Sunflower perfume. Then, come mid-June, me and all the other Long Islanders would head up to Bayside Queens to board the coach bus that would take us to camp for the next eight weeks.

And while camp was filled with magic – the type of magic that a few weeks away from the television and Nintendo 64, in nature, trying new things, being active all day, away from my parents and “home friends” can provide, it was also a trying time for me.

Because I always felt different.

After all, I was about a foot taller than the rest of my bunk. I was also bigger, changing into XLs every morning in a bathroom filled with smalls and mediums. My parents were divorced – one of the very first campers to go through this and, the kicker, my mom ran a spiritual retreat center with nightly Kirtans, goddess circles, yoga immersions and an endless supply of Ezekial bread. Needless to say, it was not the standard two parents Long Island Jewish household that the rest of my bunkmates were growing up in.

I often felt like I didn’t have “my people.” My special group who enjoyed the same activities as me, who had a similar story to me, who could understand me totally.

The truth is, this feeling doesn’t always go away as we get older. Those same feelings that I had as a kid at camp – feeling different, not a part of, separate – those feelings were the carpet I rode into adulthood. It became my mission to find my group, find my tribe, find the “friends that were like family.”

And in doing so, I realized…making friends as an adult is hard.

Throughout every stage of childhood and adolescence, we are naturally in communities. Our social structure is set up to facilitate our making new friends – we are in the same bunks, classes, sports teams, extracurricular activities, and even dorms and university groups. Even though I didn’t necessarily have the easiest time making friends as a kid, the structure was in place to help me to do.

We lose this resource as adults without even realizing it. Add on the fact that most of us have so little time after work and families, and often times feel guilty about spending time fostering our own connections rather than our children’s – it is understandable why it feels difficult to make friends as an adult.

Additionally, those age-old judgments of “cooler than/less cool than” still exist deep within so many of us. We look around at others, on social media or in person, and feel like we aren’t “cool enough” or “on the same level” as them. We compare and despair, and live into this untrue, unspoken social hierarchy ( a story that we create) that says that person is “higher” than us or “lower” than us. We are scared of not being liked or accepted, and so we don’t reach out and try to make a new friend.

But, making friends as an adult is not just a nice thing, it’s actually necessary. History shows that we need support, communities, tribes – to survive.

We as a culture come from a tribal society – we traveled together in tribes, we ate together, we lived together. We were protected by being part of, and if for any reason we were left out or left behind, our physical survival was in jeopardy. Now, while we don’t need these groups any longer to help us find food in the wilderness or defend ourselves from an opposing tribe, we do still need support for emotional and spiritual survival.

And there exists significant health benefits as well. Julianne Holt-Lunstad, professor of psychology and head of a study at Brigham Young University states that, “Not having a social support network can be a higher death risk than obesity or leading a sedentary life without exercise; the studies have shown a 50% increased odds of survival if you have a solid social network.” (Huffington Post). Other studies at Brigham Young University and the University of North Carolina have found that having friends or a social support system extends life span the same way quitting smoking does and are less likely to develop the common cold. (Time).

So how can we make more friends?

Be vulnerable. C.S. Lewis said, “Friendship is born at that moment when one person says to another, ‘What! You too? I thought I was the only one.” When you share something about yourself with someone else, connection begins to bud.

Be empowered! Utilize the courage that is inside of you. Even if you feel shy and consider yourself introverted, find your style. Try talking to baristas and people you interact with every day.

Be open! You never know what someone has been through or what their story is. So try not to judge a book by its cover.

Even though social structures aren’t necessarily set up for us to make new friends, we can set them up ourselves.

Find new communities. Go to meetup.com and explore activities of interest to you in your community. Like to knit? There’s a group for that! Interested in the wonders of plant culture? Go find it! The possibilities are endless!

Utilize social media. Find Facebook groups of people who share your interests and look for events in your area. Click on hashtags or geo-tagged locations that are up your alley and see what comes up!

Decide on one or two festivals or retreats or workshops where you know you will find your people and make the commitment. Come to Soul Camp! We would love to have you and help you to find the deep connections you have been wanting. Your tribe is waiting for you.

Even if you feel different, or like you don’t have your own manual for living like I did, remember that there are so many others just like you who feel the same way. Do you remember the music video to Blind Melon’s song, “No Rain?” The video opens with a young girl dressed as a bumblebee. She is performing a tap routine and, as the audience responds with laughter, she runs off stage in tears. As the song plays, she wanders through a city, stopping to perform her dance for whoever will watch. Ultimately, she peeks through a gate, astonished, then runs through it to join a group of “bee people” of all shapes and sizes dancing joyfully in a green field.

Soul Camp co-founders Michelle Goldblum and Alison Leipzig united to bring all of the things they loved together to create a completely transformative experience for both themselves and their communities. Going to sleepaway camp together as children, and now, both entrepreneurs in the health & wellness space, they saw that there lacked large-scale community experiences that were not only deep and healing, but fun and playful as well. They believe in the power of joy to change the world. And it happens, one camper at a time. Upcoming Soul Camps are happening in New Jersey on June 10, Chicago on June 24, New York on August 23-27 and California October 24-28. More information via www.soul.camp.