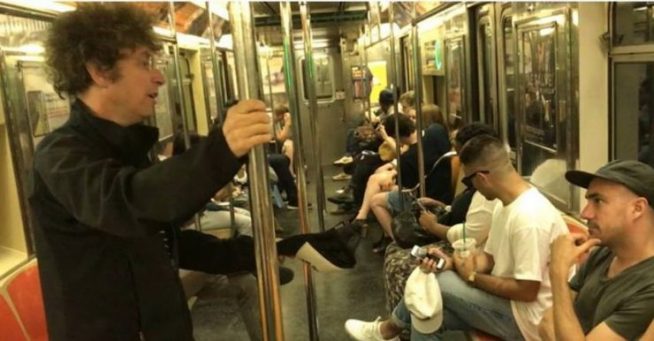 My comfort zone was killing me.

Doesn’t matter what age you are: 20 or 50 or 80: you improve and enjoy life when you dive into the deep end of the pool, swim for your life, and survive. YOU LIVE!

You improve and enjoy life when you dive into the deep end of the pool. @jaltucher (Click to Tweet!)

Even for just one day.

I’ve been trying to learn standup comedy. I’ve admired this skill for 30 years. Now I want to learn it. So I’ve been performing at clubs. It’s HARD. 60 different micro-skills to learn.

But I wanted to take it one step further.

To go into an audience that is completely not expecting it, and try to do standup comedy.

So I took the subway.

The benefit: getting even more comfortable communicating in front of strangers and trying to get a specific response (laughter). Whether they wanted it or not.

And I also wanted to tighten up my one-liners.

You can’t tell a story on a subway car. You have to have fast, one-liners that are funny. This is a skill I need to learn. A weakness.

So he played training matches with smoke being blown in his face all the time.

When Tiger Woods was a kid, his dad would throw golf balls at him while he was trying to hit.

The DIScomfort zone is NOT about experiencing pain.

Happiness and well-being are also outside of the comfort zone. You have to travel into your discomfort to find the silver linings hidden. The mystery.

The kiss I pray for only happens when I lean in and ask.

So I did standup comedy on the subway.

I went on the subway for the first time in ten years.

I was terrified. And I thought after I got in there was ZERO chance I would start talking.

There was the girl on her headphones, the man reading, the homeless guys talking, the schoolgirls giggling, and a dozen others, and me.

Nobody looking at me. Nobody wanted to be interrupted.

I said to myself, “there’s no way I’m going to do this. This was a waste of time.” And I got ready to get off at the next stop.

Then, I figured, why wouldn’t I do it? What can happen? I’m not even really trying to make people laugh. I just want to do it.

I went from car to car each stop and did standup comedy all the way from 42nd Street to the Brooklyn Bridge and back.

One joke: ” I ordered an Uber Pool and they sent me this subway car with all of you people on it.”

Another joke, “I was supposed to get on the Six and a half to get to Hogwarts but I got on the Six by mistake. Can anyone help me?”

I learned that having fun and smiling at people is just as important as making people laugh.

Being likable is a hard skill, particularly when everyone wants to hate you.

Terror is not fun. It is pain. But when you push through it, you’re in a new world. A world you never explored before. It’s a mystery, a maze, a game, a play.

Happiness is outside of my comfort zone. Every day.

[Video coming soon. I went WAY out of my comfort zone the day afterward and took it to a new level.]

** New episode featuring Gary Vaynerchuk. Don’t miss it! It’s coming soon. And one of the best ever podcasts. Be first to hear all his advice, subscribe now: http://apple.co/1ewcX8D **