3 Simple Steps to Say No with Ease! 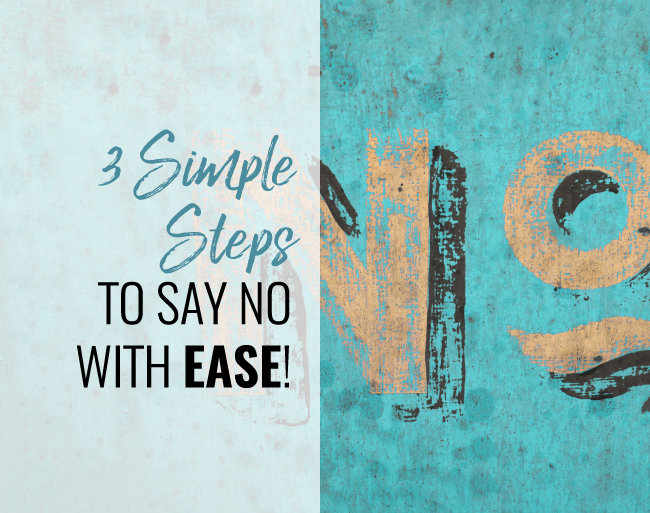 If you said yes, then you are in very good company and in luck because saying ‘no’ with more ease is just one of the many topics I will be covering during Boundary Bootcamp Season, which is officially kicking off with this episode! For the next two months or so, I will be talking all about boundaries, effective communication, and how they impact your internal experience and your relationships. Also for the ladies, our free Facebook group is re-opened today and I will be doing weekly “Wednesday Wisdom” livestreams in that private group. Each livestream will be about 30 minutes of me just downloading information for you so that it’s easier for you to understand your own relationship to your boundaries and effective communication. We will cover how boundaries impact all of your relationships, friendships, and career. I hope you’ll be joining me!

In this week’s episode, 3 Simple Steps to Say No with Ease, I’m providing some ideas of how you can honor your NO with less fear and guilt.

First, let’s break down WHY this can be so challenging. Most of us, especially women, were taught to be nice and saying no makes people feeling like they’re not being nice, right? So I think we have to sort of dispel that myth about niceness. When you think about the virtues that are held in high esteem in our society around women, niceness is at the top of the list. Men want to bring home a ‘nice girl’ to mother or at least that is what the old adage was. You don’t hear, “I want to bring a STRONG AND SUCCESSFUL WOMAN home to mother” And even if no one is saying this today- those internalized and ingrained messages are still alive and well in our collective unconscious.

The next place to explore reasons it might be difficult is to look at your family of origin. Was either of your parents people pleasers? This term was coined by a woman named Harriet Breaker whose brilliant book, The Disease to Please: Curing the People-Pleasing Syndrome and is still relevant seventeen years later. Being a people pleaser as a response to childhood conditioning has always been a thing and still is. We may consciously want to actually BE nice and if you grew up in a disordered or chaotic home, (a home with addiction or abuse too loose boundaries), you may have learned early on that saying no is dangerous or saying no won’t get you your parents affection or attention. Kids are adaptive survivors, the lesson gets ingrained quickly and then even when it has become maladaptive, those habits die hard. Childhood fear of rejection or punishment can also be a current driver of this behavior.

Now, so let’s talk about the cost. Why do you not want to do this?

Part of it is that when you say yes when you really want to say no, you’re actually being dishonest. We have this misconception about it not being nice to decline invitations, etc. Being dishonest with yourself and to the other person isn’t actually being nice. Because what ends up happening is that then you get more of the same. Let’s say you never tell your best friend that you hate Mexican food. For your birthday, she takes you to this great Mexican restaurant that she’s been dying to go to and you go, pretend to enjoy it because hey, it’s just this one time, right? Wrong.

Because now it appears that every time your girlfriend wants to meet up, she wants to have lunch at that same Mexican restaurant because she thinks you like it just as much as she does. Your intentions were nice. You didn’t want to hurt her feelings; your best friend was so excited, so you figured you’d suck it up for that one time. And now you’re in this situation where you’re like, well, is it too late to tell her I hate it?

The reality is, it’s never too late to turn the ship around and you really need to. If you want to have healthy relationships, this is a part of drawing boundaries…being able to own your own NO and realizing that it’s okay. There’s nothing wrong with saying no. Especially when we look at it from the point of view that saying yes when you want to say no is actually being inauthentic as opposed to being nice. I find that that makes it easier to find a way to say no. And you can say no nicely but you have to say it. If you continue to do things that you don’t want to do, the people in your life ultimately don’t know you and you will end up bitter. (The only place this train goes….Bitterland)

The steps you can take to say NO with ease are:

Knowing where you may have learned this behavior is step one. As stated above, think about your childhood – was one of your parents a people pleaser? Did you grow up in a chaotic or disordered family system? If you were not allowed or it was dangerous to say no, you learned early not to honor your NO to survive, to gain your parents approval or to be socially accepted, among other things.

Essentially, get rid of the AUTO YES reaction. It is crucial to give yourself space to think about if you do or don’t want to do whatever it is. Remind yourself that you don’t need to give anyone an immediate answer on anything or be available around the clock. Add a few phrases to your conversation toolbox like, “Let me get back to you on that”, “I need some time to think about that”, “Maybe” “I need to check with _____.”

3 – Trust Your Gut (and learn some language)

If you know you don’t want to sign up for the free thing or go to a bachelorette party in Vegas, trust your body’s response to the invitation. You know from the moment someone invites you to the thing you don’t want to do that indeed you’re not into it. This is not to say we can avoid obligatory events for close family or friends, but these tips are for the ones that really are optional where your difficulty saying no compels you to commit. Once you buy time (see suggestion #2) then you can come up with the way to respond that honors your truth. Below are a few suggestions of phrases you can have at the ready (practice a few times so you get used to saying NO with ease.)

“I’m afraid I can’t.” “I’m not really into that type of (music, food, outdoor event, etc.) but hope you have a wonderful time.” “I’d rather not.” “Thank you for thinking of me but I am already committed on that date.”

I talk more about this in my video which you can watch HERE, and while you are there make sure you download the cheat sheet for the full list of useful phrases to practice so you’ll know how to decline with ease and grace.

So if you liked today’s episode and I hope that you did, please share it on your social media platforms with your friends and family and anyone you know who might have the people pleasing syndrome. I hope that you guys have an amazing week and I hope to see you either on my business page for my Wednesday Wisdom livestreams at 3pm ET or in my female-only Facebook group and as always, take care of you.