How I Stopped Being a People-Pleaser 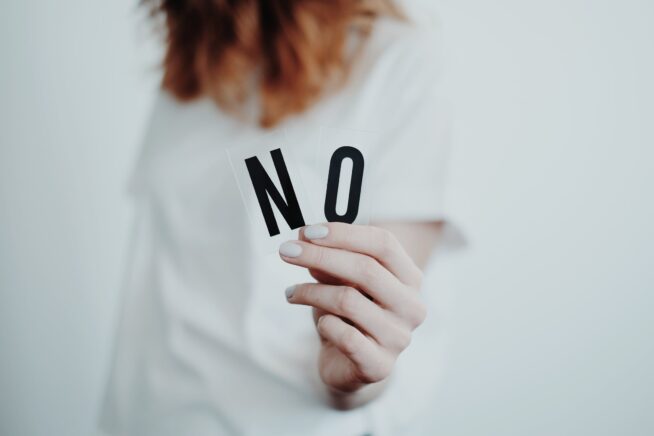 I’ve always been a people-pleaser, a “go out of my way to do things for others even if it means neglecting my own needs” kind of person.

I never liked to say no, in fact, I liked to offer my help before I was ever asked. I had to learn the hard way that being a “gotta fix it” kind of person isn’t the best way to live. In fact, it’s pretty harmful to our mental health and daily functioning. And because people-pleasing is all I’ve ever known; it took serious self-reflection before I put my foot down and decided — I don’t want to be that person anymore.

Journaling, meditating, and cutting off toxic relationships were steps towards progress, but I needed extra help in processing my emotions and getting rid of this lifelong habit of mine. So, I started seeing a therapist to dive deeper into why we become “fixers of everyone else’s problems” and how we can stop.

Growing up a People Pleaser

I was raised as a people-pleaser, a parent-pleaser specifically, and this trait only grew stronger as I aged. I am the oldest of four kids, so naturally, I went out of my way to look after my siblings as a young girl. Sometimes, I took on responsibilities that weren’t mine to take on, simply because I knew it would make my parents happy — and it would make me appear more mature to the adults around me.

I now know that I experienced emotional parentification, where I was regularly asked to carry emotional weight that a parent normally would. I invested myself emotionally in problems that a child had no business being involved in. I gave advice I was not mature enough to give. I listened to adult problems I shouldn’t have listened to. And I became somewhat of our unofficial family therapist.

But I was complimented on how well I listened, how grown-up I acted, and how mature I was for such a young girl. So, I sought that validation, and I became a young woman who wanted to help others, even if it meant neglecting my own wants and needs. But it wasn’t selflessness. It was because I thought it was what I needed to do to be valued by others.

I didn’t think the constant approval of my willingness to help others was actually harmful, but it was. My therapist showed me that the compliments from adults, while they sounded nice and flowery, were teaching me that I wasn’t contributing if I didn’t take on more than I could handle. But with that “gotta fix it” mentality, I learned I had to help others figure out their problems. I would feel guilty if I didn’t. Adults would make me feel guilty if I didn’t. So, I’d say yes.

My therapist helped me realize I was raised in a system that valued me only when I could take on responsibilities that weren’t my own.

So, I grew to love the instances when I could say yes, yes, yes, and I’d attempt to fix and save and nurture others. It didn’t matter if I was completely consumed in someone else’s problems — if I was doing something for someone else, then I was probably doing the right thing. Right?

The constant need to fix the problems of others followed me into adulthood. Of course, it did. I let people walk all over me because I felt guilty to say no to them. I found it hard to walk away from anyone who didn’t have my best interests, so I stayed friends with toxic people. I answered phone calls that I knew wouldn’t help my anxiety, simply because I didn’t want to hurt anyone’s feelings.

I felt mean if I stopped doing things for others, not because they appreciated what I was doing, but because I felt mean when I said no.

Meanwhile, I was losing sleep. I was sabotaging my own romantic relationship because her life and her unhappiness were my main focus.

It wasn’t until I realized how harmful this friend’s relationship was to my mental health did I finally distance myself from her. Her relationship problems were not mine to fix. Her drama was not mine to entertain. She was not the most important thing in my life — I was. Or at least, I should’ve been.

Embarking on a Journey of Betterment

I wanted to become the best version of me, in my personal life, in my relationships, in my career. I quit my job and started working on becoming a full-time writer. I invested more time in myself and my partner. I stopped picking up the phone calls that would leave me in tears. I stopped spending time with narcissists who only ever talked about themselves. I stopped saying yes to every little thing anyone asked of me, simply for the sake of saying yes. Instead, I chose to say yes to people who I knew would appreciate me, and I said no to anyone who didn’t. I knew I was finally on the right path.

But, I began seeing a therapist to get more insight. And when I first started seeing her, I had already done a lot of self-improvement on my own (I thought). I was sincerely happy when I started therapy. Sure, I didn’t have a great relationship with my family, but I was fulfilled in other areas of my life. I was passionate about my career. I was in love and happy. And still, there was this little piece of me that felt guilty for not supporting certain people anymore, no matter if they took me for granted.

And she said to me one day, something that left such an imprint on me that I wrote it down on a notebook, I printed it and posted it on my desk and I have it written on my phone.

Circling back to the toxic relationship my friend was in, my therapist told me, “If you’re the one doing the emotional work for someone else, you’re robbing them of growth and self-acceptance in their own journey.”

She said, “This journey you’re on, it’s taken a lot of work on your part. It’s taken you years of self-reflection, of pain and rejection. But you did all the work. Imagine if someone else had taken on all the grunt work of your personal problems? See, when you were doing the emotional work for others, even though you were helping them in one way, you were actually hurting them in another.”

I had never thought of it that way, but she was right. Every time I took on emotional tasks someone else didn’t want to do, whether it was communicating with their boyfriend, or speaking to their child because they got in trouble at school, I was, in fact, robbing the other person of an opportunity to learn, to be self-sufficient, to become a better version of themselves.

And robbing someone of their chance to improve is the last thing I’ve ever wanted to do. But without knowing it, all this time, while I went above and beyond for people that didn’t really appreciate my friendship or kindness, that is exactly what I was doing. I was doing the work; I was taking on the stress of someone else’s problems. I was stopping them from growing.

And when I looked at it that way, that I was hurting people when I invested myself wholly in their problems and personal lives, it made me think twice before I said yes to another person again — just for the sake of saying yes.

Take a Look at Your People-Pleasing Tendencies

Maybe, by hearing you’re actually not helping as much as you thought you were, well, that could be the final straw for you.

Maybe after knowing that you’re robbing someone of their own self-growth every time you focus on them and neglect you, you can step back and love yourself enough to stop saying yes to everyone.

It isn’t easy to change a habit that’s been instilled in us for years. It won’t happen overnight. Simply reading self-help articles like this one won’t give you the results you’re looking for. You’ll need to completely rearrange your priorities, starting by making your needs #1.

You’ll have to learn to see that when you take on responsibilities that aren’t yours, you are robbing that other person from learning and growing.

When you do that over time and learn how to focus on loving yourself first, you’ll see that taking on the problems of others is actually you disrespecting you.

And we have to know how to respect ourselves before we can expect anyone else to.