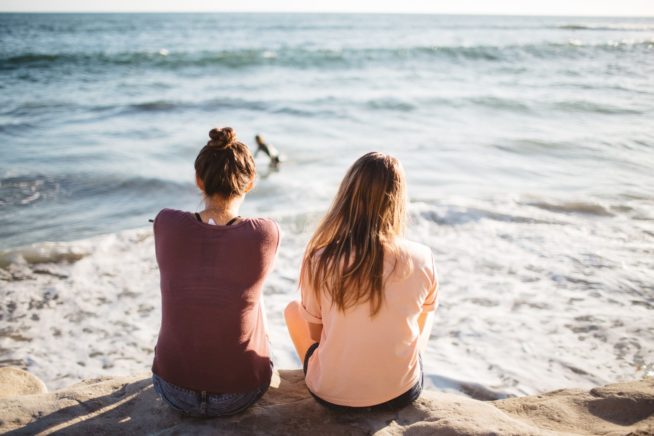 It takes a lot of self-love to walk away.

Saying goodbye to a friend or family member who doesn’t really have your best interests is a process. You have probably known the truth for quite some time but you continued making excuses for their bad behavior. It’s something we do frequently.

She’s probably really busy and forgot we were supposed to hang out tonight. Again. It’s okay.

He probably forgot I wanted his extra concert ticket when he invited someone else. It’s okay.

She didn’t seem very excited for me when I told her I got published in a magazine. I’m sure she has a lot on her mind right now. It’s okay.

We constantly make excuses for insensitive behavior because it’s coming from someone we love.

If it were easy, we would say goodbye to any relationship in our life that wasn’t a two-way street.

The problem is, it’s not that easy to call someone out or tell them you’re no longer going to stick around while they continue their selfish ways. We like to tell ourselves we’re strong enough to walk away, but it takes time, courage, and a lot of confidence to accept you’re not loving yourself by keeping this person in your life. It takes lots of self-love to walk away from a friend you’ve known all your life or a partner who you love because you know you’re hurting yourself by keeping them around.

I have a friend who I used to call anytime something good happened to me.

We had been friends for many years and been through a lot together. Although we didn’t have much in common as of lately, she was still someone I considered a friend. The problem is, every time we spoke on the phone, I could tell she wasn’t really listening to what I had to say. It was almost as if she was just waiting for me to finish speaking so she could share her thoughts. It was rude, but I always just excused it by thinking, “Well, that’s just the way she is. She’s not a very good listener.”

One of the last times we spoke, I was in the middle of a personal story when I heard a lot of noise in the background on her part.

I stopped talking when I heard her talking to someone else. When she got back on the phone, she didn’t even acknowledge that I was in the middle of my story. She didn’t apologize because I don’t believe she was even aware I was telling her a story before her interruption. It made me really sad. It made me feel even worse when she said, “It was great talking to you but I have to go.” In the middle of my story.

Like the “friend” who would reach out to me once in a blue moon, never asking how I am, or asking anything about me at all. All she would do is text me for a favor she assumed I would already do for her. Not asking for a favor but telling me. Because she knew I’d probably say yes. That is not a real friendship.

Relationships cannot be one-sided. It’s unhealthy and feelings get hurt. I have found myself many times in a one-sided relationship and I was always the person who would offer and never receive. I would present my friendship to them and the other person would gladly take it but never reciprocate.

I used to think, well that’s just how I am.

When I care for someone, it’s with all of my heart. I’ve always considered myself to be a nice person but sometimes people take advantage of that. I think it’s necessary to say goodbye to those kinds of people. There is nothing wrong with ending a relationship that is one-sided.

This message is for all of the sensitive people who don’t want to hurt anyone’s feelings. The ones who always put others before themselves. Don’t ever stop being kind. Your kindness is part of what people love about you and it makes you who you are. But don’t let anyone interpret your kindness as a weakness. Those people are the ones we need to say goodbye to.

There is nothing wrong with saying goodbye to a fake friend.

But we should love ourselves enough to recognize we deserve friends and partners who are as invested in our feelings as we are in theirs.