My Special Eleven Day Mission to See the Iran Hostages 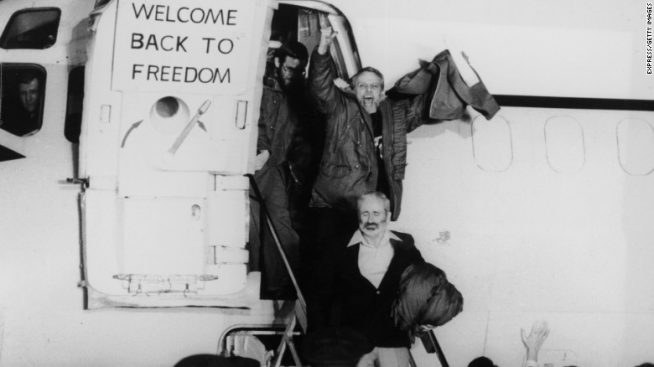 The BBC interviewed me for a Documentary Special about my visit to the 52 hostages held captive in Iran and released after 444 days in January 1981, when President Reagan invited me to greet the liberated Americans in a White House Ceremony. Below is my blog about my 11 days in Teheran.

This is a A Call From The Hostage Takers airs Saturday June 15 and Sunday June 16th. Click here for more information.

From the BBC: “40 years ago, the Iranian hostage crisis gripped the world, with details unfolding nightly on television. But one story remains untold. Desperate to get their message out, the hostage takers invited 50 ordinary Americans to visit Iran. For the Americans, this high-risk trip held the tantalising possibility of securing the release of hostages. What transpired was a journey quite unlike any of them had planned. Using archive of the visit and fresh interviews with former Iranian hostage takers in Iran and their American visitors, we hear about their hopes and misgivings at the time and their reflections 40 years on.”

Department of Defense
Freed American hostages disembark from a plane at Andrews Air Force Base in Maryland on Jan. 27, 1981, one week after being released.

The year was 1979, and like every other American I was gripped by the hostage crisis. 52 of our guys were captured and blindfolded before the TV cameras when armed Iranian militants, followers of the Ayatollah Khomeini, scaled the walls of our U.S. Embassy in Teheran. Members of the Revolutionary Guard managed to seize the attention of the entire world on that infamous November 4th.

I heard the media mention a professor from Kansas who was arranging a humanitarian visit. I decided to call him and I said: “Professor, you don’t know me, and you realize there are four Jewish hostages.” I must have embarrassed him, because he answered defensively, “Thinking about it Rabbi, you’re right!” Then, unexpectedly, he added, “OK, Rabbi,  stick around.”

I thought that would be the end of it, but two weeks later I got a phone call: “Was I interested in a special eleven day mission to see the hostages?”

It was February 5th, and we were on a plane to Teheran, praying to see the hostages and the day they would be set free. We landed on a bleak cold day at Mehabad Airport and entered a huge terminal whose walls had been stripped bare and plastered with pictures of the Ayatollah Khomeni.

We were immediately surrounded by the Revolutionary Guard brandishing machine guns. I got a lot of stares wearing a yarmulke on my head. After some tense moments we were driven to a dilapidated hotel in downtown Teheran with sand bags around the pool and machine gun posts. The militants had renamed it “Hotel of the Glorious Revolution.”

The next afternoon we were taken to a mosque to meet with an Imam. He harangued us in a shrill voice that Israel was a tool of America and the Zionists who exploited his Muslim brothers and sisters.

I could hardly contain myself. I stared at the bearded Imam and blurted out, “If you call yourselves Compassionate Sons of Allah, then why don’t you treat my people with compassion?” One of the American ministers touched my shoulder and whispered, ” Hirshel, you must feel very lonely here as a Jew.” I don’t know what stirred within me, but I answered him, “No, I’m not alone. I am accompanied by the souls of my people who have been oppressed throughout history.”

It was February 11th and we were being driven on a bus to a huge anti-American demonstration outside of Teheran University. The revolutionaries had renamed it “Freedom Square .” As we snaked our way through the demonstrators they shook their fists at us and pounded violently on our bus, yelling, “Down with America. Death to President Carter.” We were almost trampled as we struggled to climb the rungs of a rickety platform hastily erected for us the foreign visitors.

The rain was pelting us and the agitated crowd pressed against our platform. Suddenly there was a shudder and the stands started to buckle and collapsed. There were screams and moans of people being crushed underneath us. As the scaffolding came crashing down I jumped instinctively about ten feet to the ground. Luckily I wasn’t hurt but two of my companions were injured in the melee. Someone shouted over the commotion, “Rabbi, get out of here!”

After wandering through the streets of Teheran for hours I finally found our hotel and was overjoyed to be reunited with the other Americans who feared something ominous might have happened to me.

Three days later, on February 14th at 5 AM, there was a sudden knock on our door. It was one of the militants announcing, “You clergy people wait here, because soon we’re going to take you to visit the poor souls who were injured when the stands collapsed at the parade.” I had a gut feeling. Turning to Father Jack, my roommate, I said, “You know Jack, that’s just a ruse, They’re taking us to see the hostages.”

There was a priest with us who was acting strangely. He over-identified with the militants and bought their line that the hostages were somehow guilty of something. There, in the back of the van, I confronted him and asked: “Does it not say in your New Testament -Judge not lest you be judged?”

We came to a screeching halt in front of the towering walls of the American Embassy. There were the armed militants with machine guns perched on the walls high above. They looked like they were 11 years old . We were led to a room with blankets covering the windows and the ever present pictures of Khomeini.

After an anxious wait the militants led in some of the American hostages. We decided to make small talk with them about life back home to ease their fears. So we chatted informally about basketball scores and McDonalds. I was close to tears thinking, my God, when will they ever go free?”

The guards were going to allow us to take letters the hostages had written to their loved ones back in the States. I was sitting right up front and one of the hostages handed me a sheaf of letters, I clutched the letters and gave a final embrace to the hostages, whispering, “The American people are praying for you and you are not forgotten.”

I managed to hand one of the captives a Hebrew prayerbook to give to the Jewish hostages who were kept back in their cells. Ten months later, in the White House, the Jewish hostages revealed to me that the militants had deceived them about my being there. They told me the prayerbook lifted their morale and gave them hope and the will to survive.

As we were preparing to leave the militants suddenly and unexpectedly barred our way and detained us. They said accusingly: “You clergy people can’t leave. We have seen one of you receive a secret message from one of the hostages.” They were pointing directly at me. I thought, my God, did they plant something on me? Am I going to be made a hostage too? I decided to tough it out and call their bluff. So I rose to my feet and said indignantly, “I am here on a humanitarian visit and will not be treated this way!”

Despite my protest they separated me from my fellow clergy and led me into a courtyard out of view. I was made to strip down to my shorts and they searched me and all my belongings thoroughly. It was lucky I had crossed out the names of the Israeli Secret Service who briefed me in New York before I left, because they went through every name in my address book. I was sure they were itching to hold me hostage as a Zionist spy. As they were leading me back to rejoin the other Americans I couldn’t resist tipping up my yarmulke, as if to say: ”You forgot to look under here boys!”

Sadly, our Americans stayed there for four hundred and forty four days. When they were liberated, President Reagan sent his plane for them. Amazingly, they landed first at Stewart Airport in Newburgh. A few days later the President invited me to go to the White House reception to greet the hostages before the nation.

There, in the White House, the Marine band was playing. I was wearing a silver bracelet for one of the hostages. He was a brave American and he was isolated and beaten by the militants, but he never complained. He said, “Rabbi, others had it worse than me.” His mother had given me the bracelet to wear for her son while he was imprisoned. It said very starkly “William J. Dougherty, (taken prisoner) November 4th 1979”. Bill was staring at the bracelet on my wrist. I said, “Bill, would you like to come to Newburgh? We’ll have a ceremony and I’ll present the bracelet to you.” He answered “ Rabbi, if you don’t mind, I’d like to have the bracelet now!”

I’m looking at the letter Bill wrote me after that time at the White House. It’s on the wall of my study in the Temple and it reads. “Rabbi, thank you for all your efforts and for the love shown to us by 250 million Americans while we were held hostage. As far as the bracelet, when you took it from your wrist and put it on mine, the pain began to go away.”

A few years after the ordeal I officiated at the wedding of the son of one of the Jewish hostages. As his father rejoiced I thought of the biblical verse: “Those who sow in tears, shall reap in joy.”