7 Ways to Be Attractive When You’re Not Hot, Charming, or Funny 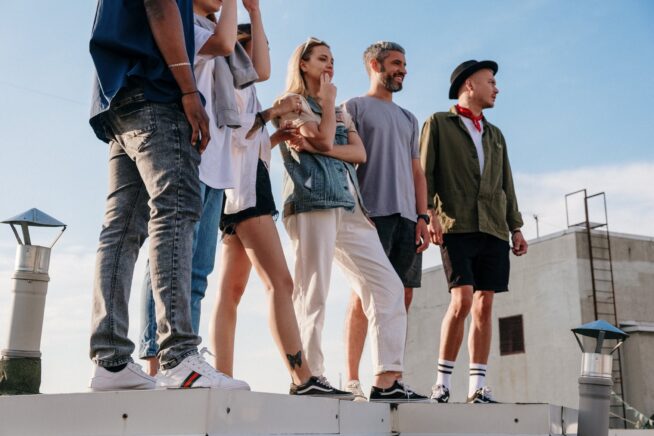 Have you ever resented someone because of the gifts nature granted them? That happened to me when my friends and I were on a ski trip.

My buddy Rebecca met a guy and invited him to hang out with us. When he entered the room, I couldn’t help but to admire, envy, and resent his perfect physique, hand-crafted facial features, and the ease at which he threw around his charm.

We made plans to meet up later with him and his friends. I turned in early that night, but when I asked about it the next morning, Rebecca had soured on him.

She explained that when he came down to the lodge that evening, not only was he arrogant, but he also dressed in a pair of baggy shorts with no underwear. When he sat, he did so in such a way that the ladies could see his equipment — and I don’t mean his ski equipment.

Stories like that prove that outward beauty and charm might make an excellent first impression, but it’s your inner qualities that matter in the long run.

For those of us who lack head-turning beauty, the reverse also holds. By adopting the right character traits, we can enhance our attractiveness and desirability — a lesson I learned out of desperation.

In my twenties, I struggled to attract women. I was shorter than the ideal guy, quiet, and cursed with rapidly thinning hair. But as I grew into my thirties, I recognized I couldn’t rely on my appearance or charm. I’d have to change what I could control — the way I act and the words I speak.

That’s how you play the long game of delayed attraction— act and carry yourself in such a way that makes you more desirable as someone gets to know you.

A thoughtful compliment makes a fine first impression. Done right, it sets you up to make a killer second impression, but not if you hand out praise the way most people do.

Let’s suppose you meet someone, and you notice they wear unusual jewelry. Ask about it. You may discover they made it themselves. Compliment their taste and skill. That kind of praise validates a person for who they are and what they do — things they control and deserve credit for.

Uncommon compliments make you memorable but remembering these details and pointing them out the next time you meet makes them feel special. That’s how you make a killer second impression.

When I was 22, I moved out of my parents’ home in Long Island and trekked across the country to live in Las Vegas. I started a job two weeks later and met my coworker Kristy, who invited me to a get together that weekend.

When I arrived, I met my other coworkers, who made me feel invisible. I only stayed because I thought it would look bad to leave early. Kristy finally came and sat with me, surreptitiously arranging conditions so that I was the center of attention. Before long, my other colleagues warmed up to me.

It didn’t take long for me to develop a crush on Kristy. She didn’t feel the same way, but during my time there, I noticed she always made it a personal mission to make the most uncomfortable person feel comfortable.

When you engage with a group of people, there’s often one or two that seem out of place. Perhaps they don’t like groups, or they’re uncomfortable for some other reason.

Go out of your way to make that uncomfortable person feel comfortable. You may make a new friend. Even if you don’t, others will notice your effort.

To attract others, it’s not always about wooing the person you like. How you treat others — especially the most vulnerable — sends a signal to potential partners about the kind of person you are.

3. Hold doors for other people but don’t make a big deal about it.

The act of holding a door open for someone is an example of a small but thoughtful gesture.

Small, thoughtful acts make you more appealing because they’re kind and they’re small enough so as not to make the recipient feel like they owe you something in return. But there’s a catch.

It only creates the desired effect when you do it without the expectation of getting something return, and without the insistence of recognition for your deed.

Seek opportunities to perform small, thoughtful acts, but don’t call attention to it, and if someone notices, don’t make a big deal out of it. Don’t do it to win points, do it because it’s part of your persona; that’s what makes it attractive.

4. Pick a physical feature that makes you uncomfortable and own it.

Shortly after turning 30, my barber cut my hair way too short. He had decimated the intricate styling technique which covered my bald spot. Humiliated, I ran back to my apartment, told my roommate I was sick, and locked the door to my bedroom while I silently wept.

After I calmed down, I looked in the mirror and realized my shorter hair improved my look. Later that day, I snuck out of my apartment, bought a pair of electric clippers, put it on the lowest setting, and fell in love with myself. I haven’t paid for a haircut since.

I owned my flaw, and my self-confidence skyrocketed overnight. I looked better, felt better, and believed in myself. In the following three months, I went on more dates than I had in the previous five years.

It’s not that I turned heads with my shaved head, but it mattered less and less as women got to know me. My confidence and how I carried myself made me more attractive and desirable.

5. Be kind and respectful when your emotions scream otherwise.

The one trait I had going for me in my youth was my ability to remain calm, kind, and respectful in situations where most people lose their shit.

In the 1990s I worked the front desk at The Waldorf Astoria in New York City. A mentally ill person came up to me and rambled about how the mayor was out to get her. I listened patiently and indulged her fantasies until security arrived.

After the incident, a coworker and friend came over and hugged me.

“That was beautiful,” she said. “I don’t know how you remained so calm and cool.”

There’s something unattractive about a person who lets their emotions dictate their words and actions. Even when it’s not a physical threat, it makes them undesirable.

In contrast, when you remain calm and in control, especially when it’s challenging to do so, you position yourself as someone safe, strong, and desirable.

6. Say and do the right thing at the right time. It’s easier than you think.

In high school, my friend Jeremy could swoon anyone just by saying a few words or performing a small gesture. Even my parents were impressed.

Jeremy always knows the right thing to say in every situation.

For a long time, I thought he had a unique gift. Years later, I learned that the uncanny ability to say or do the right thing at the right time is a skill anyone can acquire, and one I eventually learned by developing an acute sense of situational awareness.

Applied properly, it can transform someone lacking in charm or personality into someone that always knows the right thing to say and do.

In short, take stock of your environment. Identify the need of the individual(s), their challenges, and use that information to model an ideal response. These questions will guide you through the process.

Try it out yourself. In time, you’ll do it on autopilot.

7. Be the oddball everyone talks about.

When I met Sarah at work, we developed a friendship, but I felt no romantic attraction to her. One day after work, a group of us decided to go out to a club. There was some resistance, but the leader of the group eventually convinced everyone to go along with the plan.

Sarah remained the exception. She announced she’d go to a quiet jazz bar — by herself if necessary. A few folks rolled their eyes, but she didn’t care. Sarah possessed an independent streak and immunity to peer pressure. That quality caused resentment among some, but for a few of us, me in particular, it made her desirable. I wanted to latch onto the spirit that made her special.

There’s nothing wrong with going along with the crowd if that’s what you truly desire.

But to stand out from the competition, demonstrate a willingness to do your own thing, resist social pressure, and accept the consequences. It’s a quality that makes you attractive because so many desire it yet so few possess it.

Like the guy in the ski lodge proved, nature can gift you with looks, charm, and humor, but it’s nothing more than a head start. To win the attraction game in the long run, love yourself for who you are, demonstrate your character, and make others feel extraordinary about themselves.