From Our Community | Inspiring 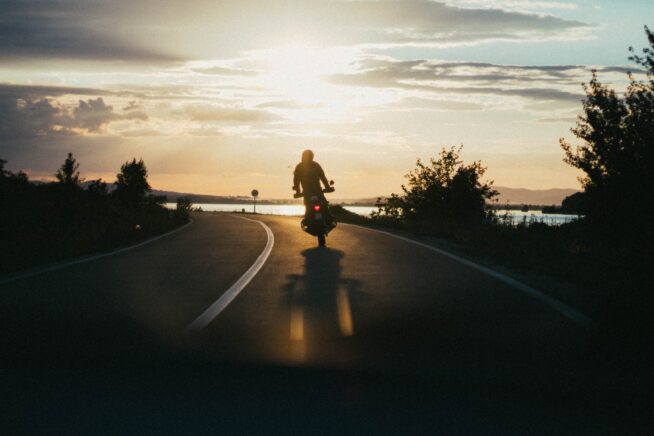 The motorcycle ride started in the town of Paradise, California, and ended in Paradise via Alaska and the ALCAN Highway. It was a fundraiser with a cause near to my heart – helping kids learn to love reading. My contribution was clear: Do what I do best, ride big miles on my motorcycle, and get people to contribute a few cents per mile for the trip. It worked; We collected around $2700 from the trip and the slideshow. 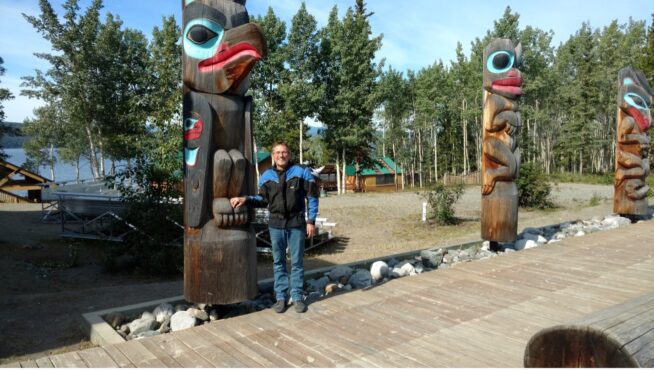 Not a lot considering I spent $2200 of my own money, but it didn’t matter because the clear winners were the kids….and me.

What comes next is the rest of story.

It was July 16, 2018. I was enjoying an evening ride, never dreaming that an automobile driver on meth and ecstasy would hit me so hard that it would tear my BMW motorcycle in half, sending pieces of it 425 feet down the road.

What I remember is a very loud noise, flying thru the air, giving someone a phone number, pain, the sound of the sirens, pain, someone trying to fit me to a body board, excruciating pain, and then, thankfully, nothing.

This is what I know from the police report, the doctors, my family, and my daughters.

My right leg had two compound fractures, my right foot was crushed and pointing backwards, my left arm was broken, my pelvis was broken in three places, and there were numerous ribs broken, but the worst damage was the broken and fractured cervical vertebrae including a complete break of the c1-c2. Things were so dire they put me in a coma for 21 days and had a nurse in my room 24 hours a day for the first week. 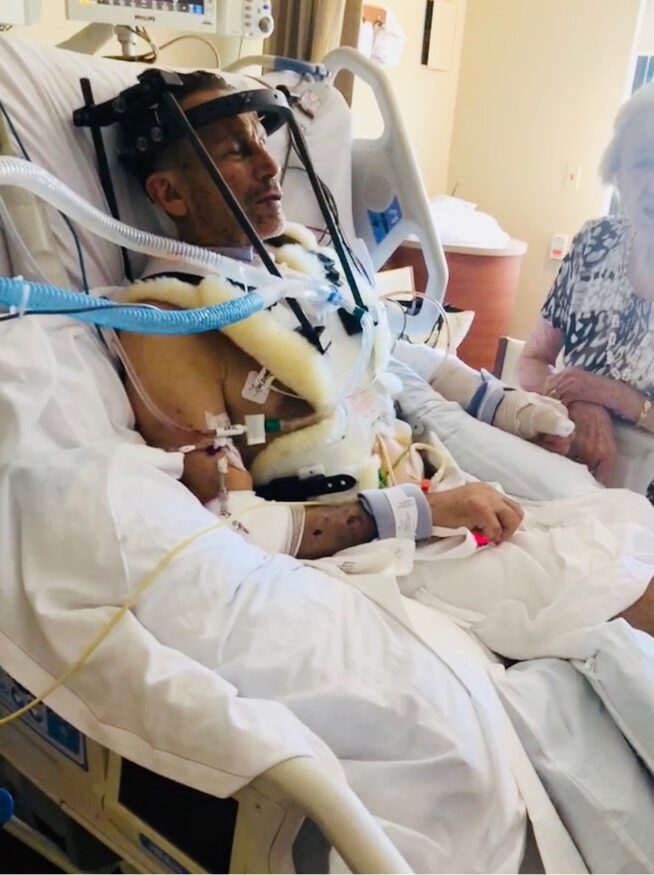 I have memories but nothing concrete. Just vague echoes of a time my subconscious is trying to protect me from. People coming and going, friends, family, fear, pain, and thirst. One of my first clear memories is looking across from my bed and seeing pictures of my family and cards from friends taped to the wall. My oldest daughter Erika put them up so that when I came out of the fog, I would know who I was and that I was in the loving arms of those that cared about me.

Recovery from trauma this bad is difficult and we don’t do it alone.

We stand on the shoulders of the doctors, nurses, and our family. They were all doing everything they could to help but I was starting to give up, it was becoming too much. I remember telling Erika, “I wish they had left me on the side of the road to die” and I will never forget what she said.

“Dad, I want you to reach inside to the tough old man that we all know is there and give me eight weeks.”

I didn’t know if I had the strength, but for my daughters I would try. Recovery from terrible injury is a process. You don’t go from near death to a normal life in one step. There are many little steps and small victories. During the eight weeks, the metal halo holding my head in place and the cast on my arm were removed. I was allowed to eat and drink instead of taking in what I needed through a feeding tube. They got me out of bed and wheel-chaired me around the hospital grounds. People were allowed to visit. I took a shower and finally…finally they allowed me to exercise. 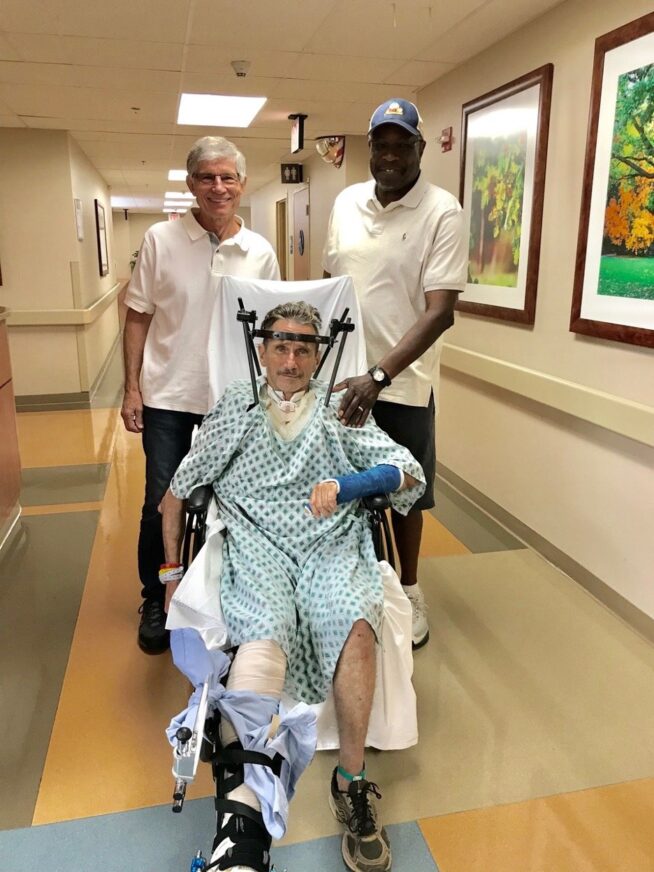 The eight weeks I gave my daughters were the gift I needed to get through those terrible days.

I was released from the hospital after three months with a wheelchair, shower stool, and an admonition to take it easy with the physical recovery. Going home was wonderful, scary, and difficult at first. It was probably a good thing that I didn’t know things were about to get much worse.

Since getting out of the wheelchair two weeks before, caffeine and conversation were again my morning addiction. My right foot had eleven pins holding the bones together, so it was still MIA, but the left foot worked well for both the throttle and brake on my truck so I was able to get around. I was on crutches now, still weak from the long stint in the hospital but was slowly getting stronger.

It was November 8, 2018, around 7AM and there was smoke in the sky above my house. Our block had been evacuated several times over the last couple of years, so I ignored the smoke and went to the coffee shop for my morning ritual.

When I arrived, there was no one around except the owner and one barista. Before I had finished my coffee, the owner came running over and asked me to leave. The whole town was being evacuated. As I went out the door I called my brother Scott, who was visiting for a couple of days, and told him to grab my dog Bella and be ready to go, we were getting out. The drive most of the way home was relatively uneventful, but that was going to change in just a few minutes.

The smoke was getting thicker, the skies were getting darker, and the sense of dread was going through the roof. When I pulled into my driveway, I saw Scott banging on the door to our neighbor’s house trying to wake him up. Once the neighbor was up it took us a few minutes to grab the dog, get in the car and on the road.

Our idea was to travel on Billie Road, which is two lanes, to Clark Road which is a four-lane designated escape route from town. Both lanes on Billie were moving in the same direction away from the fire but traffic was at a standstill. It took two hours to go the one mile to Clark.

I was starting to get really concerned.

We could see fires and hear explosions. The town was going up in flames around us and we were barely moving. Finally, we made it to Clark Road and that’s when things went from bad to worse.

In an attempt to keep traffic flowing and utilize all the escape routes, law enforcement was routing some vehicles to other main roads via side streets and back streets. We were redirected through the center of town to the Skyway, another designated escape route.

It was here that we really began to understand the scale of this disaster. The fire was all around us, trees were going up in flames. Not just burning like a piece of paper – starting at one end and ending up at the other. The trees would suddenly explode into flames sucking the air out of our car. 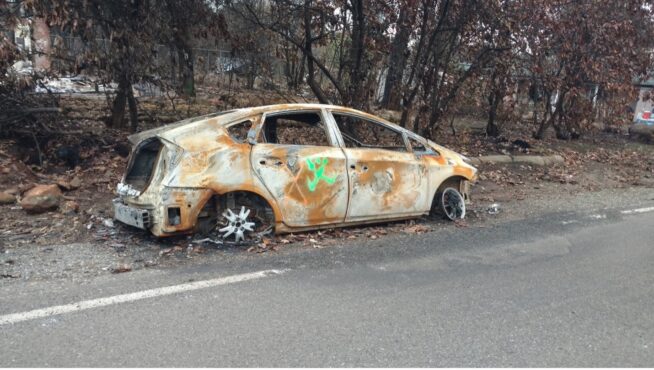 We could feel the heat, it was terrifying.

Some people were so panicked they were hitting other vehicles while trying to escape. The traffic would start to move, and we would think, “We’re going to make it,” but then it would stop and the road would turn into a parking lot with flames all around.

Fear was our constant companion but so was hope. The people in front of us moved, we moved, the people behind us moved. It was bumper-to-bumper for hours. At some point we reached the Skyway and we thought, finally, we can get out of here. That would have been great except that our lane was redirected down a small two-lane road and that’s when the real terror started for me.

After traveling a short distance, the traffic stopped and didn’t move for what seemed like forever. The fire was on both sides of the road, the wind was howling, and the flames were up in the canopy of the trees. There were explosions going on all around us and I knew it was time for me to run. I pulled off to the side of the road so I wouldn’t block traffic in case things opened up, jumped out, grabbed my crutches, and ran.

The plan was to get out of the trees down to the grasslands and hope we could jump through the fire. I had to be very careful.

My neck vertebra were not fully healed and if I fell into something or fell and landed wrong, that would be it for me.

The wind was blowing crazy hard, the flames were catching me, and I was running out of strength. I made it maybe a third of a mile but there wasn’t much left in my “tank,” and I was truly starting to think that maybe I wasn’t going to survive, when all of the sudden the traffic started to move.

The three of us jumped in his truck and to this day I believe that man saved my life.

We started our evacuation around 8 a.m. and got to The Enloe hospital in Chico at 4 p.m. The longest day of my life.

Even though all we had was the clothes on our backs, we made it out while many didn’t, and I am grateful for that. We are now part of an exclusive club that I hope no one else ever has to join. 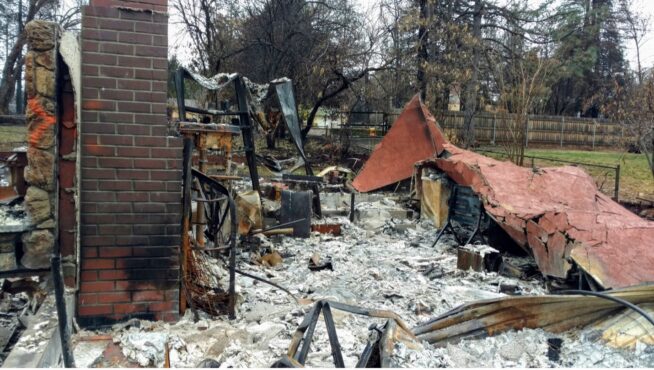 As I ruminate on my life before the accident and compare it to my life now, I’ve come to one conclusion.

I can’t let this accident, this one person under the influence, define me and who I am. That’s why I am doing another Reading Pals ride to raise money for this great cause. 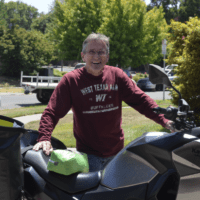