Running into Your Past: When You Remember the Old Friend That You Forgot 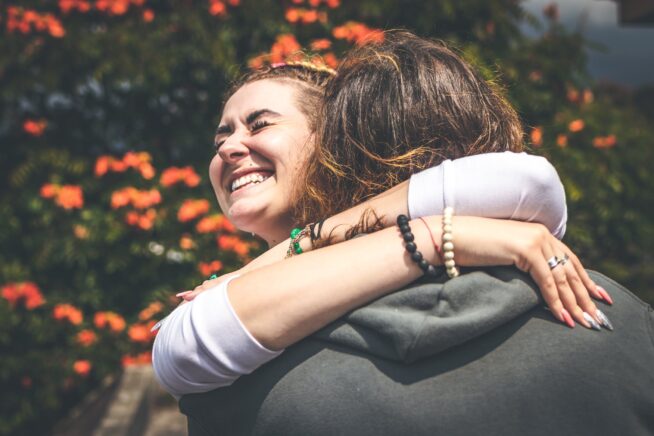 One day I decided to upgrade my phone to something with a screen large enough that my aging eyes could see without squinting. I was hoping that I could find a new phone with a battery that might stay charged longer than a few hours.

I started scrolling on the AT&T page, trying to decide which phone I wanted to purchase. I was shocked to find that they would send someone to my home to set it up for me. A cell phone house call?

Anyway, the phone set-up guy gets to my house, and he looks super familiar. “Do you remember me?” he asked.

At first, I couldn’t place him, but then he reminded me that we volunteered together at a local radio station a million years ago. We hung out in the same group of friends and would often go out socially after our radio broadcast.

I had not thought about this guy for at least twenty years, but when he reminded me about our connection, it all came flooding back. Like I was watching a movie about my past, I replayed memories of working together, hanging out at bars, going to concerts together with our friends.

While he was setting up my new phone, we had a good time chatting about “the good old days” when we were young and carefree activist music people.

When he left, I couldn’t help but think, what are the odds that someone I knew over twenty years ago would randomly show up on my doorstep to help me set up my phone?

It turns out the phone guy also lives in my neighborhood, and has for a long time. It made me wonder how many times I have been walking down the street or eating at a restaurant, and seen someone who looks vaguely familiar to me — something we all experience from time to time — and it’s because I actually know them from a long time ago.

How many times do we see someone, but not really see them, and then we don’t make the connection?

I have no clue, but it did make me reflect on the connection between people. Think about all the ways your life intersects with someone for a period of time, then there’s a change, and they’re gone.

One day you are seeing each other on a regular basis, maybe you even consider that person to be a good friend, and then suddenly they are gone. Gradually they fade completely out of your thoughts.

Maybe something happens once in a while to remind you of the person and you think, “I wonder whatever happened to them?”. Or maybe you run into each other, out of the blue, like me, and the phone guy.

There’s a concept called Dunbar’s Number, developed by anthropologist Robin Dunbar, which asserts that based on average human brain size, and average social group sizes, humans can only maintain about 150 stable relationships. Dunbar called this, “the number of people you would not feel embarrassed about joining uninvited for a drink, if you happened to bump into them in a bar.”

Even if someone moves out of your 150 relationships group, and you completely forget about them, is the human connection ever really broken once it’s established?

Recently I was scheduling a meeting with someone for work, and in the course of our conversation, the person said, “We used to work together in the 90s.”

Her name was vaguely familiar but honestly, I didn’t really remember her based on her name. But then we saw each other at the meeting, and coupled with the knowledge of that past connection, I instantly remembered her.

Then I couldn’t believe that I’d forgotten her. Honestly, I felt bad about it.

According to the study, if you and those 300 people were all in New York walking around Manhattan on the same day, you would have a 12.7% chance of running into them.

“Look, it had to happen at some point. In a city of eight million people, you’re bound to run into your ex-wife.” — When Harry Met Sally

Even though this is how Harry met Sally, I’m not sure if I believe this statistic. But I have had weird instances of running into people.

Once I was walking alone down an almost-empty beach in Nice, France. I saw a solitary guy walking towards me, and as he got closer, I realized he was one of the other 30 people in my semester abroad cohort. We were all staying in London at the time, and randomly we both took a weekend trip to Nice, and ended up at the same quiet beach, at the same time, without knowing the other person would be there.

This happens to all of us: you meet a college friend at a random airport, you see a former coworker at a concert, you realize you and your cousin are both visiting the same city the same week, you run into your ex-boyfriend in Las Vegas.

Then there’s the semi-awkward catch-up conversation, the “It was good to see you, I’m glad you’re doing well” goodbye, and possibly a lingering sense of sadness that you once really were connected to this person, and now that connection is long broken. Or is it?

Harry: [about the song Auld Lang Syne] What does this song mean? My whole life, I don’t know what this song means. I mean, ‘Should old acquaintance be forgot’? Does that mean that we should forget old acquaintances, or does it mean if we happened to forget them, we should remember them, which is not possible because we already forgot?

Sally: Well, maybe it just means that we should remember that we forgot them or something. Anyway, it’s about old friends.