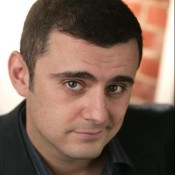 Gary Vaynerchuk is a talented entrepreneur, a self-trained social media expert, and a best-selling author. At 8-years-old he was operating seven lemonade stands in his neighborhood and by 10 he had moved onto selling baseball cards at local malls. In high school while working at his family owned liquor store, Gary started reading The Wine Spectator and wine books, and realized collecting wine offered an allure similar to his previous hobby of collecting baseball cards. With a wealth of knowledge and an entrepreneurial spirit, Gary spent every weekend of his college years at his parents’ wine store. Recognizing the importance of e-commerce in 1997, Gary launched Winelibrary.com and helped grow his family business significantly from $3 million to $45 million by 2005 and then in 2006, with a Flipcam perched on top a NY Jets bucket, Gary began Wine Library TV which revolutionized the wine world. His wine reviews soon attracted over 100,000 viewers each day and his die-hard fans started to call themselves “Vayniacs.”

In the spring of 2009, Gary and his brother AJ launched VaynerMedia, a new breed of agency that helps Fortune 500 companies like GE, PepsiCo, Hasbro and the New York Jets find their social media voices and build their digital brands.

With close to 1 million followers on Twitter, Gary is recognized internationally as one of the top people every entrepreneur should follow and a social media trailblazer. He’s received substantial attention from the media including guest appearances on Jimmy Fallon, Late Night with Conan O’Brien and Ellen. Gary’s ultimate goal is to own the New York Jets. Although his various businesses obviously play an enormous role in his life, he always puts his family first.
Living

How to Build the Biggest Building

You’re Focusing on the Wrong Stuff

Entrepreneurial DNA. Do you have it?

Gary Vaynerchuk: A Penguin Cannot Become A Giraffe, So Just Be The Best Penguin That You Can Be [VIDEO]