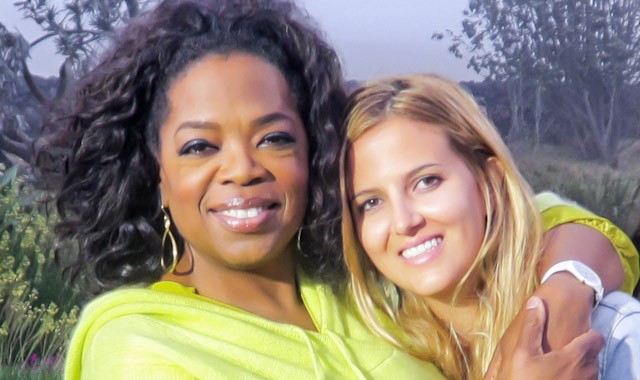 Meeting the most influential woman of the twentieth century has been a dream of mine since I first started watching her show in my early teens. This past February, as I pulled up to Oprah Winfrey’s home on Maui so she could film a show with my dad, I realized I was about to have one of my long-term wishes fulfilled.

I love Oprah because she is the whole package: she looks for the good in everyone she meets; she has dedicated her eponymous show—as well as her life—to bring spirituality to the masses; she has earned incredible wealth and genuinely enjoys sharing it and giving it away. But most of all, just by being herself and allowing her true magnificence to shine, she has become a beacon of light for all humanity. Oprah lives her dharma, and in doing so, she allows her true nature to shine. What a joy it is to watch and learn from someone who loves doing what they do!

One of the biggest lessons I have learned from Oprah Winfrey is that of setting your intentions and becoming what it is you want to attract—not just asking for it. And, more importantly, letting go.

I have learned from both my dad, Dr. Wayne Dyer, and Oprah that you don’t get what you want, you get what you are. I decided to apply this philosophy to my life and to become a person who is focused on serving others and not so focused on what’s in it for me. It was really challenging for me to blindly trust that things would work out, that money I needed would show up at the right time, and that I didn’t have to strive to arrive. There were times when I felt that I wanted to be like the rest of my friends and make a set salary, to have a position in a company that told me what to do and paid me for it. At the same time, I knew those things weren’t me so I decided to simply trust that if I served others, I wouldn’t be left behind. I started my own foundation, Stop Child Trafficking, that focuses on raising awareness about child trafficking in the United States. I became a Guardian-ad-litem, which is a volunteer advocate for abused or neglected children, and I spent a year working for free to raise money for a documentary film whose cause I believe in.

I always knew I wanted to work for myself, but I was so afraid that I would fail or that I wouldn’t be able to get anything done if left to myself. However, when I started to focus on other people and how I could help them, I realized that the universe was clamoring to help me achieve what it was that I wanted to do. Having this knowing that things really do work out, that I can truly just let go and be at peace and everything will handle itself is a really freeing lesson to learn. I used to feel so stuck in my career and my life, and I had this belief that I had to push and push to get everything done. Now, I have learned to set my intention, become what it is that I want to attract and then let go. In the past, when I had something that I wanted to attract in my life, I would call everyone I know and talk about it. I would listen to their opinions on it and then start to doubt it or feel unworthy. Now, when I have something I would like to attract in my life, I offer myself up to the universe to become it for others first, and I don’t talk about it with other people. When I am lacking peace in my life, I don’t ask God to please send me some peace. I ask God to please “make me an instrument of thy peace.” When I wanted a loving relationship, I asked God to please teach me how to first truly love myself so that I could then offer that love to someone else. Then, I assumed how it felt to really love myself, to really feel deeply loved by someone else and I concentrated on that feeling.

In 2008, I decided to make a vision board so that I could have a visual reminder of the type of person I had set my intentions on being. I wasn’t sure what type of career I wanted so instead of putting a specific job on the vision board I put words that represented feelings I would have if I was doing my dream job. I also added words representing the man I would like to attract into my life rather than images of a really hot guy. I also cut out photos of other people doing activities I wanted to do, like meeting children in Africa, driving an old car down the coast of Italy and going wine tasting in an exotic location. I actually glued my face over the other people’s faces so I could see myself doing these things and not just imagine them! I cut out images of a big yacht, a silver Mercedes, some nice jewelry, and I put the word “travel” all over that thing just in case the universe was being extra generous!

I also put on my vision board images of Oprah Winfrey and Ellen DeGeneres with myself right next to them—and can you believe it? I had the opportunity to meet Ellen in 2009. And this past February, as Oprah put her arms around me and gave me a big hug, I knew that it worked! All my dreams and visions were manifesting.

Pretty much everything on my vision board has come true. I went wine tasting in Sonoma this past September. I drove in a vintage Aston Martin in Sardinia in 2010. That big yacht and silver Mercedes? Well, it turns out that my dream man has both of those, and we just celebrated our three-year anniversary together. My career is heading in a direction I feel proud of and I have had the opportunity to take so many trips in the past four years that my friends jokingly call me “the world traveler.” So many of the material things and experiences I desired happened to show up in my life in ways that I can’t even explain or make sense of, but the truth is, that isn’t even the coolest part.

The best part has been really learning to become like Oprah. I find myself wanting to share everything I get, wanting to look for the good in everyone, and most important, more than anything else I want to serve others in the way that Oprah has so graciously demonstrated for me. Learning to serve others without asking “What’s in it for me?” has given me a sense of peace and purpose that feels better than any jewelry, car, or vacation ever could.

Serena Dyer is a student and human rights activist whose mission is to eradicate child trafficking through advocacy, education and research for the Stop Child Trafficking Coalition. Serena is currently co-writing a book with her dad, renowned author and speaker Dr. Wayne W. Dyer. The book, “Don’t Die with Your Music Still In You” is scheduled to release in Summer 2013.