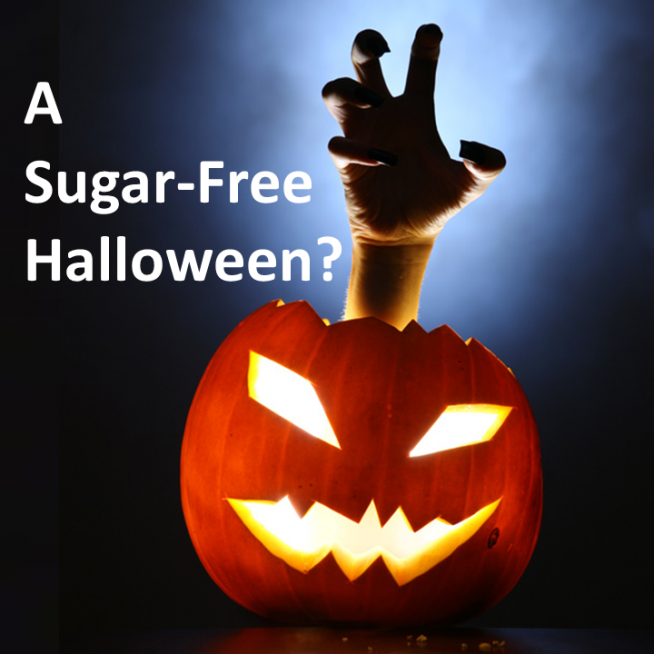 Can you believe it’s October already?! And any minute now, Madeline is going to start asking me to buy a costume for Halloween. That’ll be easy: not a day passes without listening to the Frozen soundtrack. Elsa it is!

Then the real battle begins. Madeline knows Halloween = candy. And I know, once that kid gets some sugar in her, we’ll have a horror movie on our hands.

Before I had a kid, I never dreamt that holding on to my health and wellness standards would be so hard. I sort of thought, “I’m the Mom. I make the rules.” I was 100% wrong.

In some ways, it is unrealistic to say you can raise a Sugar-Free Kid. Before I had a kid, I thought it was possible.

So we’ve set up some rules for this Halloween. We’ll take her out for an hour trick-or-treating, maybe two max and she is not allowed to eat any of it until we get home, when she can have one small treat. Then, after that, we keep just a small bag of what’s left, that she can only have one piece of after dinner if she eats well all day. Long ago, we set up a practice of having one treat a day. It’s a big event and Madeline gets really excited to pick her treat.

The tricky part for parents is getting through Halloween without thousands of pounds worth of candy and kids laid out night after night in sugar comas. I brainstormed with some other moms and here are some suggestions that I hope will help.

There are so many reasons this is a great idea. First, you decide what treats your kid, and everyone who comes to the party, are going to eat. There are some super cute recipes and ways to decorate healthy food on Instagram and floating around Twitter and Facebook – have fun with it! Second, you won’t spend the entire night chasing your kid down the street or worse, driving her around while thousands of other parents do the same thing. Third, your kid is safe, at home, with nothing to fear about where she is on Halloween night. Have a haunted scavenger hunt in your backyard with ghosts, bats and witches hung in the trees and ultraviolet lights shining up at them for extra spooky effect. Make the treats they have to find toys, fake tattoos, or games instead of candy.

You know kids LIVE for the opportunity to stockpile candy –  the kid with the heaviest bag wins, right? So, if you are planning to set limits on how much candy they can have Halloween night and every day until it’s gone, TELL THEM ahead of time. Don’t wait till you’re home to tell them they’re not getting to keep all their candy, or whatever limits you’re going to set for getting the candy they’ve worked so hard to collect. That is just a temper tantrum or fight in the making when they get home. Just be super clear before they head out what to expect when they get home.

This is a great opportunity to teach your kids how to share and to help others who are less fortunate. When all the trick or treating is done, ask your kids to put their candy into two piles – the stuff they want, and the stuff they don’t. Then take the candy to a shelter for battered women or find a charity that sends candy to troops overseas. Giving your kid the chance to make someone else smile will be so rewarding for both of you.

It is SO HARD to totally keep your kids away from Halloween candy. One way or another, they’re probably going to have some, plus you don’t want them to be the ‘weird kid’ at school that has nothing while everybody is all sugar-buzzed out of their minds. But you’re still the parent and you CAN be in charge of how much they get.