Speak Your Truth or Be Silenced 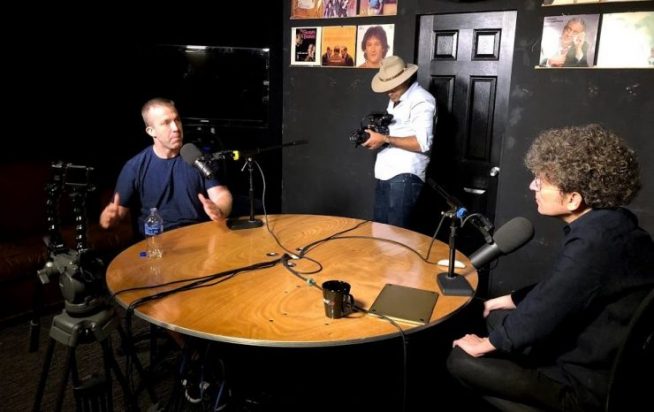 20 years ago, Tucker Max emailed me for advice. I told him to quit his job.

15 years later Tucker helped me launch “Choose Yourself” (my first self-published book). Now he does this full time. His company, Scribe Media, makes it easy for people to write and publish their book.

And I’m a strong believer that everyone has a book inside them. So I asked Tucker how it works.

And you keep the content. Unlike in traditional publishing where they take 80-90% of revenue.

That’s why Nassim Taleb (author of “AntiFragile” and “Black Swan”) is publishing his next two books with Scribe Media. Because it’s critical to own your content.

And you don’t need a bunch of “yes’s” to do what you want.

You can just do it. But then people don’t.

And the truth is they won’t.

So I had him walk me through this.

“The best books are positioned for the reader,” he said. “But the actual book itself has tons of your own stories in it.”

That’s how I wrote “Choose Yourself.” I wanted to write the book my younger self needed to read.

Tucker wrote the book that would make his friends laugh. He didn’t think his stories would be funny to anyone outside of his friends.

And he was wrong. He sold 3 million copies of “I Hope They Serve Beer in Hell.”

“My stuff blew up because all I did was stand up and use my real name and tell my real stories about my real life. And I get why people are afraid,” he said. “But then you gotta ask yourself, ‘Am I going to speak my truth or am I going to be silenced?’”

Every time Tucker comes on the podcast, he’s smarter. He’s been on six times. (I think that’s the record.)

For some reason, he kept telling me “I don’t think you understand.”

“Wait, why am I always wrong?”

Then he’d tell me.

Here are six things Tucker Max taught me on his sixth appearance on “The James Altucher Show.”

1. “People don’t want to hear the truth if it doesn’t reinforce their identity.”

He told me an old fable about an emperor. You might know it. But if you do, you probably heard the wrong ending.

A lot of old fables are rewritten for modern days to be “nice”.

So the fable Tucker told me goes like this…

A scammer convinces the emperor to wear “an invisible suit.” He’s naked. But he believes he’s wearing this magical suit that only the smartest people can see.

He wants to be smart. So he says he can see it.

Then the Emperor throws a parade. He’s fully naked. No one wants to call him out because they’re afraid of looking stupid.

So they all lie and pretend they see it.

Finally, a kid shouts out the truth. “He’s not wearing any clothes!”

And they kill him.

In the new version, everyone snaps out of the illusion. But in the old version, the child is viciously murdered by a bunch of deranged adults.

“No one wants to face this or talk about this or think about this,” Tucker said. “For almost everyone, once they lock in their identity, there is no fact that will ever shift them off that identity. Ever. And they will literally ignore things, clear as day, right in front of their face. Even things that threaten their lives if it threatens their identity. That is the way humans are designed. It takes a transcendent soul to be able to even broach that a little bit and think a little bit independently, much less transcend identity.”

I don’t have some action item here. I just like thinking about this. Maybe I’ll make an idea list: “10 Ideas I Could be Totally Wrong About.”

2. “No adult has it figured out and they’re all f—ing lying.”

This one is sad. And it’s a relief.

I’m constantly afraid to check comments online. And if someone shits on my living floor, I’m deleting it.

So Tucker was giving me advice. Because his sphere of caring is really tight.

“For most people, it’s very large. It encompasses so many ‘they’ and ‘them.’ And I ask people, ‘Who is they? Define they.’ And most people can’t even define that. If you do get them to define it, they’ll say things like, ‘Well, society.’ Or, ‘Well, myfriends.’”

And Tucker just gets more and more specific.

“‘What friends?’ You dive down and eventually when you get to it at the core, it’s parents. You get that a lot. ‘What will my mom think?’”

That’s when Tucker says, “One: whose life are you living? Yours or hers? And two: if your mom doesn’t love you for expressing who you truly are, I gotta wonder about certain aspects of that relationship.”

When you listen to the podcast, you see that Tucker has a lot of points:

Then he gets into the fact that some people don’t want to break out of the chains. They want the excuses because they keep them safe.

And it’s really up to you if you want to be “safe” or free.

4.”Facts are irrelevant in tribalism.”

And you can see this everywhere. No just left versus right. But team versus team.

“Think about this,” Tucker said. “We grew up when Soviet Russia still existed and was an enemy. In that time in American history, the Soviets were ‘the other team.’ And America was our team. And nothing they did could be right. And everything we did was right. Go look at what people wrote at the time. It will blow your f—ing mind.”

It goes back to identity. How you identify is how you think.

“There are a hundred years of research on this,” Tucker said. “And there’s a great book on this called, ‘The Elephant in The Brain.’ It’s the most mind-bending book you will probably read in the last five or 10 years. It is mind-bending.”

5. “If you don’t care about the problem you won’t succeed.”

“I want to make a million dollars” is a bad reason to start a business. That’s not a mission.

A mission is this:

When Tucker says, “There are so many people who have so much brilliance in their heads who will never get it out… unless it’s very easy for them. That’s literally why our company exists. That’s why we call it Scribe, because Socrates was a brilliant, genius man, but no one would know who he was if it wasn’t for his scribe.”

6. “Everything mass and everything scale is breaking up.”

TV networks used to only compete with other TV networks.

Now they’re in competition with every single person online. Everything is saturated. There’s more content being made today than ever before.

“But what if someone listening to this is disappointed and they want to be mass? What should they do?”

Six is a short list. Tucker and I talked for two hours. And I’m breaking up the conversation into smaller clips.

I try to do this will all my podcasts now. (I’ll always release the full episode, too.)

But I feel the content is so good that it shouldn’t be missed. And oftentimes, people stop listening to a show when the car ride or train stops.

So you can listen to the full episode. Or check out the small clips on my YouTube channel.

“I Hope They Serve Beer In Hell” by Tucker Max

My interview with Brian Koppleman

Nassim Taleb author of “Antifragile: Things That Gain from Disorder”

My interview with Nassim Taleb

Jordan Peterson author of “12 Rules for Life: An Antidote to Chaos”

My interview with Jordan Peterson

“The Courage to Be Disliked: The Japanese Phenomenon That Shows You How to Change Your Life and Achieve Real Happiness” by Fumitake Koga and Ichiro Kishimi

My interview with Tifanny Haddish

“Linchpin: Are You Indispensable?” by Seth Godin

“The Elephant in the Brain: Hidden Motives in Everyday Life” by Robin Hanson and Kevin Simler