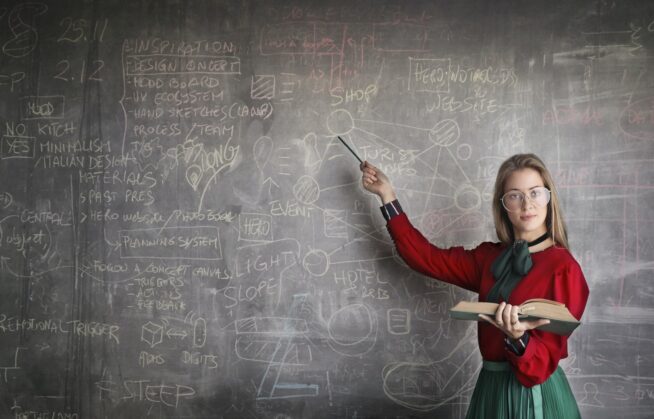 Have a (disinfected) seat.

Allow me to paint the setting. It’s early on in the pandemic, like a week or so before lockdown turns into more than a suggestion. I’m at my personal trainer’s / ex-brother in law’s one man gym (Beth’s second husband, Armin) with my other sister and boss, Lauren Zander. You know her. And, if you don’t, you should.

But let’s just agree that awesome and intuitive, she is; subtle, she isn’t.

So there we are. It’s 7:30 am and as I do some crunch-like things, Lauren is happily sharing with me how much fun she is having coaching her favorite people (mostly CEOs and entrepreneurs) and helping them to not pandemic-ally freak out, but pivot and create. In her world, a wise one, there’s nothing like a shit show to cause a seismic shift show or the need for one. And then she does IT.

She makes a joke — between you and me — it’s one I’ve heard her make a few times already, but haven’t gone near. It was the one where she compares humanity, in the face of fear, to lemmings (rodents that cliff dive when scared) and how it’s HG’s job, during this time, to help make lemming-aid.

P.S. In hindsight and as I type this, her joke was harmless, dead on, and, in all fairness to lemmings, albeit pathetic, are cute. Except that morning. And fine, the morning before and before, I did not find it funny…

Predictably, in cases like this when my sister/boss makes a joke, I either 1) laugh, find it funny and clever, write it down, knowing as VP Content of HG I can and should use it somewhere, or 2) I try to be snice (snake + nice), laugh-ish, get what she was going for, and, wiseacre sister-like write her idea in air pencil. However, this time, for some reason unbeknownst to me (coming to a paragraph near you), I wasn’t even up to wise-assing, smirking, or air penciling it. So, I tell her my truth…that I think that her calling humanity lemmings is insensitive. Especially now.

She looked at me a little cross-eyed. As she does when I say something odd, telling, and Marnie-like (not in the good sense). And she said, let me get this straight, “You have no problem calling humanity liars, dark, sneaky fucks, and full of shit, but ‘lemmings’ is a line you won’t cross?!”

“Yes,” I said, still pretty darn certain I was being heroic for speaking my truth on behalf of the world. Then, she did something only a kid sister can do with a straight face. She said if it offended me so much, “maybe” (a notorious HG wink of a word) it was because it was true about me. Very much akin to the age-old “if you smelt it, you dealt it” fart fact type of line. Yep: as I was charging her with being insensitive, she was charging me with being a fear-based leaping lemming.

Then what happened next was very pre-DICK-able* of me.

Something, in fact, right out of my righteously wronged playbook. I took in what she said (sort of) and proceeded to “uh-huh” her until our hour workout-ish was up and then off I went home.

“Off” would obviously be the right word choice.

You see, predickably, whenever someone gives me anything BUT a great note, I get offended, hurt, shut down, quiet (except for my uh-huh-ing you) and start talking to myself about the tone in which the note you gave (mind you, even if it was correct) was given. I know this about myself. EXCEPT, almost every time IT happens, I unCUNTsciously (spelled correctly incorrectly) forget this play in my playbook.

In fact, it’s the very fact that we ALL get amnesia when it comes to our predickable traits and its playbook that locks the trait in place. It’s what has it return and not only return but stick around for a bit, pretending it’s way different than EVER before or justified by whatever our current predickament is. Except, ask your children. Your partner. Your boss. Your sister. Is it really new? Is it really justified? Or, is it the same as it ever was…?

You probably don’t have to look that far these days to spot some of your predickable traits, right? I mean, not like it EVER takes all that much to rock any of our boats, upset our mood, and/or have dark thoughts? Now, add to the mix a global pandemic, an indefinite quarantine, an unimaginable death toll, a tanking economy, homeschooling, the news, Trump on Twitter, an upcoming election, and VOILA many of our crappy go-to traits undoubtedly and, yes, predickdably rise to the surface.

Maybe rise is the wrong verb here…more like, runneth over.

And although many of us — myself included — think that we’ve already done more than enough work on ourselves to have grown up and out of some of these old traits and behaviors, it’s somehow still kinda shocking and disappointing to discover its inevitable return.

Personally, I wish I could just blame COVID-19 for the resurgence of my crappy trait. But this particular predickable trait (there are more) isn’t just pandemically predictable, it also happens to make appearances on holidays, birthdays, Mondays, some Tuesdays, big deadlines, large dinner parties, and more. Anywhere I might be worried, could fail, over-yes-ed you, put off me, or might get notes.

Which particular testy (and testing) trait of mine, you wonder? It’s one I’ve come to call:

Mean Martyrfucker, the trait that needs a vacation from her generosity. That gives up her shit for you, without telling you. The one that you so much as give one note to, she’s hurt and you’re dead.

See: lemming-aid. Apparently, I was in it not just for me, but for you, too. Baby sister Lauren laughs again; only this time, I get the joke. Yowza, right? I know none of you (I jest) can relate to this or her.

So, ask yourself this: what predickable traits are in your playbook?

You know, X happens, then Y happens, then Z happens. Once you know it, name it something befitting and even goofy, you can call it out. There’s nothing even terribly terrible about it, or sad, right? It’s human and understandable: It’s not even hard to predick: We get scared things won’t turn out and out s/he comes. Period.

Welcome to the species.

The question is not: will our predickable traits show… it’s when. Are we in the right promises, practices, and public policy (everyone in our life knows about the plays in our playbook) to reboot our higher self when they show and be our own hero, slay our own dragon, or, at the very least, put our own dragon back in its pet carrier.

*No, not a type-o, a purposely misspelled word we at HG love to make up so we can quickly laugh at our lower selves and liberate our higher selves, quickly.

adjective
Behaving or occurring in a way that is expected….namely, dickish or whatever brand of bad mood, thoughts, negative traits or habits we have in our playbook. Whether it’s tiger-moming, disrespected, unappreciated, grudge-holding, hurt-hunting, irritable, arrogant, stressed out, anxious, put upon, salty, etc. Only this time, we’re duh-mb about its predictability. We even think it’s new and we’re entitled to it.

P.S. Inner.U Life is a 12 session online course that gives you the tools to hack into your own life, hone your dreams, and have every last thing you want in the areas that matter most to you: CAREER, MONEY, LOVE, TIME, FAMILY, and HEALTH. Do this life thing better from wherever, whenever.