The Hauntings of a Bicultural Childhood 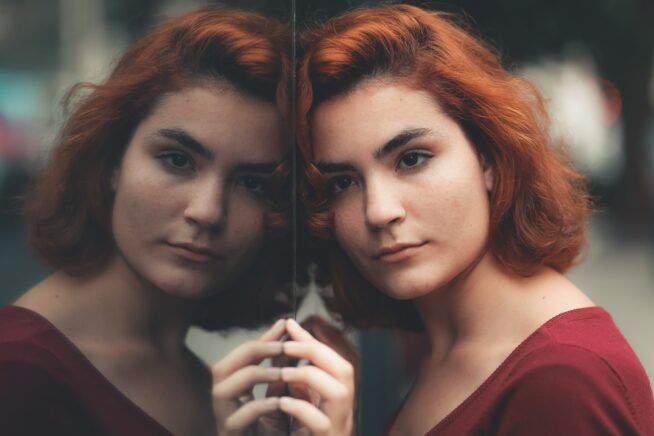 Several times a week, with predictable regularity, my mind launches on an eerie escapade to five thousand miles away. An NJ town where soared by the twelve years of my childhood and teenage years opens up the doors of its dwellings to my wandering, sleepy psyche. Eyes shut to the real world, I keep circling the rooms of my childhood, meeting its inhabitants all over again as if stepping into a weird parallel dimension where life goes to sleep when I wake, and wakes when I fall asleep.

In this unconscious realm that shapeshifts between past and present, I reenact not the most exciting environments and people I had known, but those that in waking life I remember as the deepest shade of monotonous. In fact, I now believe their monotony had been a safeguard against forgetfulness, a means of self-preservation through repetitiveness. If so, the trick has worked. In the spaces I return to night after night, the details have been preserved meticulously. Life’s repetitiveness is an impeccable storage facility for memory.

Within my dreams, I never ask questions. What I see is what I believe. The questions begin when I wake up. Because I know the dreams haunt me for a reason and I know my trigger.

The trigger isn’t trauma or even nostalgia. It’s the fear of losing anchor.

If there were something like cultural bipolar disorder, that would be me.

I’m quite sure my initial split of reality started twenty years ago, on the day my parents had the crazy idea of bringing a nine-year-old kid to the opposite side of the globe, one they had not a kindred soul on. As a result, I was brought up far away from my homeland and the rest of the duality just rolled off from there.

Two languages and cultures became responsible for everything I think, speak, write, and dream; I went on to have two absolutely different professions; my life alarmingly alternates between total seclusion and the bustle of a big city. It’s almost as if my whole environment is bipolar, except I’m not.

I came to the U.S. at the turn of the new millennium, as a faded photo of my nine-year-old-self riding the NYC ferry against the background of the immaculately intact World Trade Center captures. Some things I already knew, like the language. Others were totally new and scary, like my new school. Anyways, pretty soon it was down to daily, simple life. A life that went on, with its ups and downs, for twelve years.

Had I stayed put in the States for longer than twelve years, there would’ve been nothing strictly ‘bicultural’ about my experience of life. Immersed so young, I would have fully assimilated the adopted culture I was raised in. However, at twenty-one, I felt it was time to forge a new path and rediscover my roots. I traveled halfway across the globe back to my original birthplace, plus 400 more miles. And to everyone’s surprise, I stayed.

It’s been eight years now and I wouldn’t trade my current lifestyle for anything. Neither would I trade my youth around NYC, essential in educating my subconscious and conscious selves. But I’m also fully aware of the split this bicultural life formed in my psychology — the split that my dreams, pleading as they are of Jungian analysis, are only a stubborn manifestation of.

Eight years had passed since I consciously walked the streets of my childhood, and in all these years I’ve felt no sentiments about the departure. Essentially, I have no need to romanticize the past, for several times a week I come revisiting it without so much as a knock. One could say the dreams haunt me. But in the optimistic, blazing daylight there’s no sense of either nostalgia or pain following these hauntings. They’re just there, monochrome ghosts living a life of their own.

Even without touching base on a topic as captivating as Jungian dream analysis, I know what the “ghosts” are and what they want. They’re my subconscious manifestation of a fully conscious refusal to let go. To let go of the part of my life that has chiseled and taught me one of the fundamental principles of life — fragile unity, but has also split me in two.

Almost everything I do in life is either a result of my bicultural experience or a homage to it.

The choice of English as the language to write everything from personal diaries to journalism to poetry while living thousands of miles away from the U.S. is a homage to the literature that has shaped my mind.

But it’s not about language alone. Language is only the “umbilical cord” nourishing and tying me to a people I don’t only know well but feel extremely well. The people whose hearts and minds I connect to. It’s this connection I can’t afford to lose.

It’s simple enough to say we’re all part of one big Mother Earth. It’s simple because it’s fair. But to know it down to your bones is nowhere near as simple, and something we feel only through long years of experience.

The cultures that bring us up leave a permanent trace on our mentality. Even in our centralized, globalized world where each city resembles another like a twin, it’s impossible to feel each of those thousands of human mentalities and cultures without calling one or other them off as “weird” or “peculiar” — at least sometimes, in the privacy of where it’s safe and “politically correct”.

Yet the greatest gift my bicultural experience has given me has been the ability to drop the veil of “weirdness” from seemingly separate and opposite cultures. Its greatest pain has been seeing the powerless of this experience against wider prejudice. The same experience that makes me see people as defined only by their humanity, their kindness, their humane essence, and not by politics, race, customs, is a source of great pain when I see the ton of prejudices the world is still comprised of.

Although this fact is so simple that we proclaim it from the tribunes, in practice we compare and contrast peoples, cultures, customs, all the time. Just think of it: if the world as a single community stopped pressing upon its differences, there would be no more violence or wars. Every single act of violence in history started with igniting difference among a group of people. Every act of peace started with nurturing unity.

Contrary to popular view, a child that is a product of two cultures doesn’t just take in “the best of both worlds”.

He or she is faced with a constant struggle to choose where their loyalty lies — pressed by their peers, the social system, sometimes even the family.

As that child ages, it understands the duality that will forever accompany it. It also understands that the perfect Ying-Yang balance its parents may have once imagined as the metaphor for a bicultural childhood is a misconception. The “Ying and Yang” will keep fighting for their place under the sun (dominance in your life and psyche) throughout your life. Each language and culture will try to pull you over to its side, and to twitch the scales in its favor in small but poignant ways.

Ever since I moved out of the U.S., almost all my relationships have rotated around the multi-cultural scene. As a result of my own culturally “bipolar” experiences, I have gravitated towards other foreign lands and have been terrible at forging friendships and relationships with people next door. In fact, it seems to me that I put up artificial barriers to barricade myself up in advance. It’s not that I don’t give local friendships a chance. But somewhere in our relations, there’s always a searing gap, the one where their participation ends and my “other life” begins, a gap on which I’m all too ready to heap the blame of any misunderstanding.

As I grow older, the gap grows with me. It sticks out in my subconscious via recurrent dreams, but it sticks out in my waking life no less. I know what it wants, what it’s after: to make a statement, to make itself remembered. It’s my “other side of the moon” calling out, turning its face to the sun, uttering “do not forget”, and since it fears the voice may be lost in daylight, it just keeps shouting through the dreams.

The shouts are getting difficult to stifle. And more than once now, I’ve thought of what they really mean and how far I’m ready to follow them.

That other face of the moon, the one tied to my English-language upbringing, is more than “another side” of my personality. It’s nothing short of my anchor. My umbilical cord to the people of this language, to all of you whom I am mentally speaking to. I know you, I hear you, and even if sometimes we disagree, I love you.

It’s this anchor I know I’m utterly terrified of losing.

Some days, I feel honestly troubled: is it time for a total, as in drastic, change? Time to let go and take things simply, organically, dropping the fear of being the overprotective parent for either of the two cultures within me? Is it time to just let things roll without posting the protective tape around any parts of myself?

In other words, is it time to stop the haunting? Perhaps, to take up a white sheet of paper and draw up all my old houses, people, and towns in colorful crayons as my six-year-old self once did to stop the recurrent nightmares following the 90s Leprechaun movie? If it worked then, perhaps it will work now?

Yet is closure not what I’ve been trying to avoid so stubbornly?

Is not the whole haunting my psyche subjects itself to on a permanent basis a protest against the possible abortion of a certain self that feels endangered, unprotected, vulnerable in a non-native environment? Is the very possibility of letting go of any part of my biculturalism, in both directions, a betrayal?

These remain open-ended questions that I’m terrified to answer because they mean I may have no real anchor anywhere. Were the situation to reverse, I would feel exactly the same about my other culture, my other heart. As the human heart, divided, it will bleed to death.

Perhaps the time for answers has not yet come. Or perhaps, as the ghosts of my past hint at, the key is in the process, not the outcome, and the salt of this adventure we call know thyself is to keep digging. I know I will.

As another night draws near and I anticipate the familiar paths, all I can do is attempt to harmonize the eternally struggling opposites of my two homelands, assuming that somewhere within the spacetime allotted to me, I will find a way of making “the best of both worlds” click.

May somewhere within that space of wholesomeness I find a permanent anchor.