Don’t Be Better… Be “the Only” 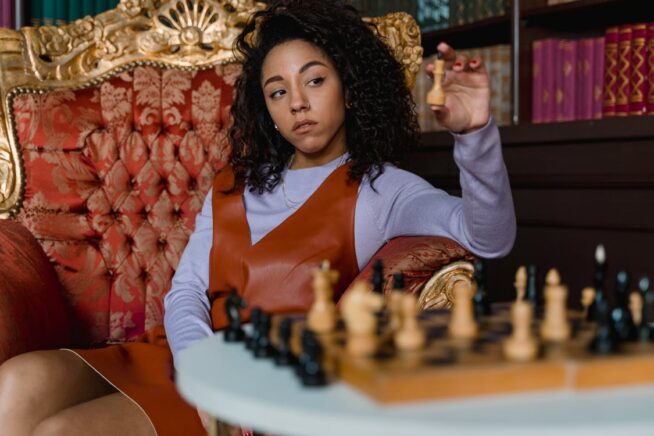 In her first race, she came in second. I’m proud of her.

I hope she stays interested in it. And I also hope she doesn’t die from it. She really loved it but we’ll see. Love needs follow up, as my wife often reminds me if I play chess online all day.

Here’s the thing: She got into every college she applied to.

Now… I told her NOT to apply. I told her all the reasons I think college is a waste of time and a waste of money and a general waste of life energy.

“But you went to college,” she said, “why is it good enough for you but not me?” — says everyone who asks me about this.

It’s because I went to college that I am against it. I try not to have a cognitive bias just because I did something.

But this isn’t about the merits of college.

Here’s why I wanted her to take race car lessons before she applied:

How many kids from the NY-PA-CT-NJ states apply to college? How many of those kids have sufficient grades, sufficient SATs, after-school activities, some sports, and decent essay writing schools?

Nobody can tell the difference. All of their applications look the same. They are photocopies of each other. They are clones begging to be selected by the casino of college admissions.

BIG DEAL. Nobody can tell the difference. Even if it’s right there in the numbers. Because when you throw in random after-school activities (this one played basketball, this one worked at a charity, this one wrote a decent essay about her trip to Iraq), NOBODY CARES.

Andy Warhol was a great artist. I’m not talking about his Campbell’s Soup Cans or Marilyn Diptych. Before that. When he actually drew pictures.

He was the best illustrator in his day. There were other good illustrators but none as good as him.

Guess what? Nobody cared.

He was a low-level “drawer” in the advertising industry. People he worked with probably hated him and talked behind his back.

The average person can’t tell if one person draws 20 or even 50 percent better than another drawer. I know I can’t.

I had bad grades. I had OK SATs. And I had no after-school activities. Why stay “after school”? I never understood that concept.

But I was “the only.” I played chess. But a lot of kids did. I was my state’s high school chess champion. When I showed up for my interview, we spent the entire time with me teaching him some nuances in the Taimanov-Fischer match of 1971, which, by coincidence, my interviewer had been studying.

Here’s an image taken from the July 30 edition of “The Home News” about the upcoming US Open and my participation in it. 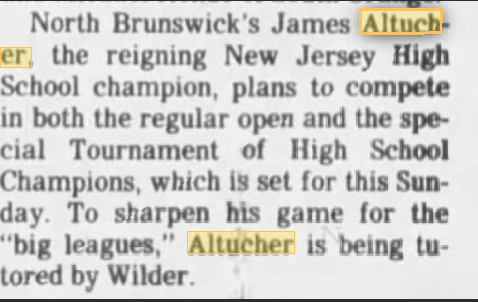 When I applied for a job as a computer programmer at HBO I failed the interview. I had no idea how to program for the Macintosh or how to do network programming. I knew nothing.

But I was “the only.” Turns out the group I was applying for was very competitive with another group in chess every afternoon. I got the job.

I suggested to Lily five different things she could do to be “the only.” I wanted her to be aware of the choices so she would do something she loved.

If you don’t do something you love — but just to get into school or be famous or make money — then you screwed up.

Anything worth getting good at is very hard and very unpleasant.

Learning is hard. When you first start learning something you screw up a lot and that’s unpleasant. You lose car races or tennis games or people think your art is crap or your standup comedy is not funny or you lose chess games.

When I was 18 if i even lost one chess game I would cry. One time I was losing a game and rather than hold out my hand and congratulate the winner gracefully, I swept my arm over the board, knocking all the pieces onto the ground.

I’m not saying this is a good thing. Being a sore loser will ruin improvement. But you have to love something if you are going to return to it after being constantly shot down.

Every time I tell people, “Oh, I’m taking my kid tomorrow to race car driving lessons,” they always respond, “Really? That’s the coolest thing! I wish I had done that as a kid.”

So she was “the only.” There were no other people in her class her age.

When admissions officers got her application, I know for a fact it went into a different pile. It went into “the only” pile instead of the pile that a committee would have to decide who is better than who.

When Andy Warhol wanted to be “the only” his first plan was to make paintings of sugary romance comics. But then Roy Lichtenstein started doing it. Andy Warhol thought to himself, “I can do it better.” But he knew that “better” is BS and “only” is what creates a new genre of art.

It wasn’t even his idea. A friend of his, Muriel Latow, suggested almost half-jokingly that he paint Campbell’s Soup Cans. She wasn’t an artist. She was an interior designer. And she liked soup.

Warhol loved the idea. He asked her if he could pay her for the idea so that it would be officially his. He gave her $50. Which in today’s money would be about $300.

Was the iPhone a better phone? Some say yes, some say no. But it was the only phone that had every song ever written on it.

Was McDonald’s the best restaurant? Almost definitely not. But it was the only restaurant chain in the 1950s where, no matter which one you went to and no matter where it was, the food tasted the same and the restaurant was clean. It was the only chain that had those features at that time.

Was Betamax better than VHS as a videotape? Yes it was. But VHS destroyed Betamax and became the dominant brand. Betamax was better, but nobody cared and that’s all it had going for it.

Is my daughter the best student? I have no clue. But she’s definitely in the category of “only.” Particularly if she keeps pursuing race car driving. That’s where the love part comes in.

Think about where you can be “the only.” I promise it will change your life, save your life, ruin your life, and transcend your life.

When I was 16 I was really into break dancing. I know… cliche. But I was obsessed with it. I wanted to be a professional break dancer. My dad asked me how I was going to get into college with that. I said I didn’t care. Ok, he said.

But then I was asked to play on my school’s chess team. I barely knew how to play. I took a book with me on the way to a match our school was playing. I was the fifth board, the bottom board, because I barely knew the rules.

I remember the book, How to Think Ahead in Chess by Fred Reinfeld, and it recommended playing the Stonewall Attack. I memorized it on the way over there, played the Stonewall. And won. My teammates were happy and I was happy people liked me. I was hooked.

Marcel Duchamp was one of the most original artists of the early 1900s. But when he was 31 years old he quit art, left NY and moved to Buenos Aires and basically spent the rest of his life playing chess. It’s addictive and he was an addict.

He couldn’t stop. People begged him to get back to his art. But he said, “I am still a victim of chess. It has all the beauty of art — and much more.”

Did he make the right choice? I don’t know. I’m an addict. I still play every day and maybe a bit more than I should.