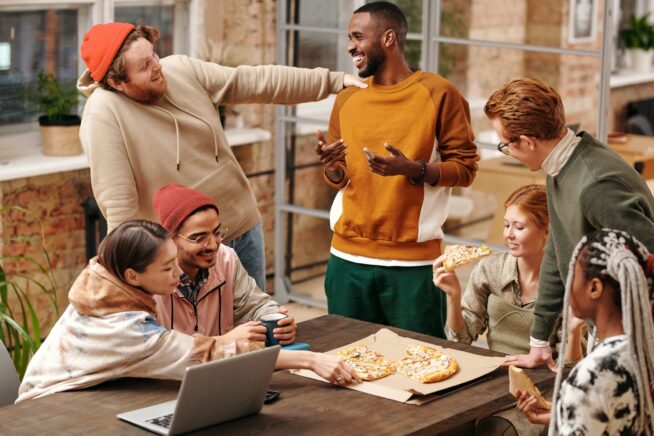 There I was, sweating in my party dress in the August sunshine, desperately trying to impress a woman named Lucy. Lucy was cool, she was pretty, and she seemed to like me, too. I was unbelievably nervous but hopeful about our potential future as friends.

“So what kind of books do you enjoy reading?” I asked her. It’s my go-to ice breaker because books are an easy subject for most people to talk about.

“Oh! I love romcoms most. The old school stuff was bad, but the newer books are right up my street,” she said.

“Definitely!” I replied. “Nothing better than a happy ending.”

Then she did something that is very, very rare in group conversations. She asked me a simple reciprocal question.

“What about you? What books do you like most?” Lucy asked, oblivious to the fact that she’d just blown my mind.

It was at that exact moment that I realized she was genuinely interested in me as a person.

We suck at meeting new people.

I don’t want to exaggerate the importance of Lucy’s question, but think about it: When you meet a new person, you put a huge amount of pressure on yourself. You have to stand up straight, maintain eye contact (but not too long), remember the person’s name, and think of what you’re going to say next when the conversation turns to you. All while panicking that there’s spinach stuck in your teeth.

Humans just aren’t that good at it. As a result, when we meet new people, we focus on the easiest topic of conversation: ourselves. You’ll quickly notice when you talk to other people that most of the conversation is about them, not you. You may notice this in yourself, too.

Don’t take it personally. But good conversationalists are in the minority.

It can be easy to impress new friends.

This general lack of skill makes it incredibly easy to tell when someone is super interested in getting to know you as a person, and makes it very easy to impress other people in conversation, too.

Most folks will forget to ask about you. They’ll be worried they’ll get your name wrong, or they won’t have remembered your hobbies, so they’ll just keep talking about themselves.

When someone asks you a simple reciprocal question, that is enough to prove that person likes you and is interested in getting to know you further, especially in group settings where it’s easy to get distracted talking to the wider group.

How to use this test in the wild.

You’re probably already picking up on these cues subconsciously. Recent research by Huang et al in 2017 suggests that humans naturally like other people more if they ask questions. “When people are instructed to ask more questions, they are perceived as higher in responsiveness, an interpersonal construct that captures listening, understanding, validation, and care,” write Huang et al.

The good news is you can use this two ways. If you want other people to like you more, simply remember to ask reciprocal questions. It’s even better if you can work in a detail from earlier in conversation. For example, during our conversation at the party, Lucy not only asked me a question in return, but she also remembered that I’d said I had lived in the UK, so she asked me about British authors.

You can also use it as a quick test to see if someone actually likes you. Many people are charismatic to everyone, so you may think they specifically like you because they’re good at shining that spotlight on you, but they’ll neglect to actually ask you about yourself. Their personality carries them.

When you ask a question and get a reply, wait for a beat to see if your conversational partner asks you a question in return. If they don’t, don’t take it too personally — they might like you, but are just overwhelmed with trying to give a good first impression.

But if they do, it’s a solid sign that they like you enough and are interested enough in your answer to actually remember to return the question.

Next time you’re at a party, talking in a group or one-on-one, pay attention to who asks what. The fact that most folks are so bad at conversation means that when someone really cares about you, they’ll stand out like a shining star — if you know what to look for.