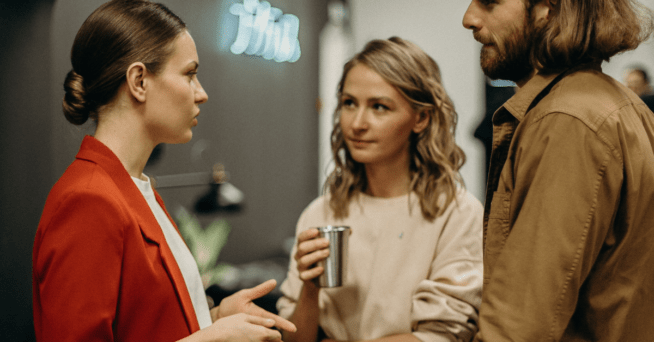 Have you had that ultra-embarrassing moment when you’re talking to someone and you’ve forgotten their name? Or that you’ve been monologing about yourself for the past five minutes? Or that you’ve made a joke that was badly received? I totally have.

I’m not alone, either. Especially after a pandemic that forces social distance, a lot of us are feeling rusty at basic conversational skills.

Luckily, talking well and easily is a skill that you can improve and lose like any other. Here are 11 tricks I use, recommended and backed by psychologists, to be less socially awkward and better at talking to other normal humans.

Researchers found that placing themed objects in the room you’re having the conversation affects how the person you’re talking to thinks and feels.

To use this trick for yourself, think about the tone you want to set for your conversation and which objects might set that tone. For example, if you’re trying to flirt with someone, why not place a candle in the room, or a bed?

2. Make sure they tell the truth by asking them to repeat their story backward

There’s no shame in having a faulty lie detector when it’s been a year without social contact. If you’re trying to suss out if someone is telling the truth, ask them to repeat the story in reverse order. If they struggle, they’re probably lying to you.

Psychologists call this phenomenon the “cognitive workload.” Telling the truth is easy — if you’re lying, that’s an extra burden on your poor brain. Imagining your fake story in reverse is much trickier than simply repeating an honest story backward.

“[M]ost people spend the majority of their conversations sharing their own views rather than focusing on the other person,” the authors of a 2017 paper in the Journal of Personality and Social Psychology tell us. This makes it hard to grab someone’s attention without waving your arm in their face and shouting their name repeatedly.

To avoid that, simply build soft tension — ask a question you know they’ll be able to easily answer. This allows them to stay the center of their own world, but puts the focus on you. Examples include asking about favorite music genres, books, or foods.

4. Make a perfect first impression by tickling their frontal lobe

The words you use when you meet someone affect how they think of you pretty much for the rest of your acquaintance. If you want to knock it out of the park the first time around, use positive language to stimulate their frontal lobe.

A study in 2009, conducted by Maria Richter et al, described how the presence of negative words like “disgusting,” “grueling,” and “dirty,” cause stress in the moment as well as contributing to long-term anxiety. Positive words, like “refreshing,” “celestial,” and “warming,” conversely, decrease the expression of stress hormones.

5. Remember their name with mnemonic devices

It’s no secret that a person’s name is the sweetest sound to them. Ensure you give your conversational partner what they want by remembering (and using) their name in conversation.

One 2016 psychological study found that it’s much easier to remember names if you use mnemonic devices. For instance, if you meet someone named Oliver, you might remember that he has blue dots all over his tie.

Talking can be stressful! There’s no harm in acknowledging that. But if you want people to like you, don’t be tempted to fake it till you make it. If you don’t feel like smiling, don’t pretend — wait until you can genuinely smile.

Research from a 2019 paper shows that consumers can instinctively tell the difference between real and fake smiles, even for Instagram celebrities and influencers. If they can’t convincingly pretend to smile, you probably can’t either.

7. Use “conversational entrainment” to have a more productive chat

Psychologists define this as “spatiotemporal coordination resulting from rhythmic responsiveness to a perceived rhythmic signal.” In human talk, this means you mirror what they do.

Research from a 2019 paper shows this works best when you mirror three aspects of their conversation: verbal cues, like the way they form their sentences; lexical, like the types of words they use; and nonverbal, like eye movements. This has been demonstrated to give us “productive and fulfilling conversation,” according to Borrie et al, 2019.

Improvisational theatre is famous for the “yes-and” approach. In order to keep conversation flowing and expand on a line of thinking, improv actors say, “yes, and” when it’s their turn to speak. Research has shown that this strategy works well to foster collaboration and trust in businesses and academic settings.

To do this, catch yourself the next time you start to say no or go off on a conversational tangent. Instead, try to yes-and whatever your conversational partner was saying.

9. Ramp up your listening level

I can be guilty of putting my “listening ear” on autopilot. Especially in group conversations, many of us don’t actively listen but just passively absorb and assume we’re understanding what people are saying. But it isn’t true. Research shows that actually listening demands a lot of effort — and the more effort you put in, the better you listen.

To make friends and influence people in your next conversation, try to simply be aware that listening is an active exercise and ensure you’re hearing and reflecting on what your conversational partner has told you.

Teasing is viewed as a fun and harmless way to casually chat and joke. But it can have real harmful repercussions to your relationship with the person you’re talking to. “[T]easing is often negatively evaluated when it is meant to amuse the hearers at the target’s expense or it is delivered in a non-affectionate way,” writes Valeria Sinkeviciute in her 2017 paper on the subject.

Instead, ensure that you go for an affectionate delivery, that you don’t target the same person repeatedly, and that you don’t make jokes at the expense of a single person.

Starting from ages as young as four, research shows humans have a strong perception of “us” versus “them.” Luckily, a shared interest is all it takes to get into the “us” group with whoever you’re speaking with.

If you’re struggling to chat, try looking for something you have in common with your conversational partner. Sports, music, food, books are all great places to start looking.

Talking is a superpower. I’m always in awe of people who can strike up a conversation and easily bond with others within the span of a few minutes, being socially awkward myself. But like any other skill, it’s something you can learn and improve at.

These 11 psychological tricks can help you can manage conversations a little more easily, especially when you’re out of practice.