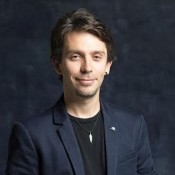 Dr. Dragos is an award winning scientist, filmmaker and speaker on 6 continents. Dragos holds a Ph.D in satellite-based intelligence, and has received several international awards for his scientific research and innovation. Fresh out of university, Dragos traveled alone on two expeditions to the North and the South Pole, and he became the engineer of the first Romanian Simulation Mission to Mars, paving the way for future manned missions to the Red Planet. In 2015, Google and Singularity University selected Dragos to be part of a major entrepreneurial venture at NASA in Silicon Valley. The program brought together future leaders and entrepreneurs to create solutions for humanity's grand challenges. Forbes Magazine named their team “among the smartest people in the world.” In Dragos's own words: "My purpose is to bring the Divine back in our lives, because only with God we find healing, total forgiveness and the love that transcends all hurt. All our dreams are possible when we set free the power of love."
Inspiring

The Secret of Life

Lost Innocence: The Healing of a Heart

The Most Powerful Affirmation

What Do You Got?

I’ve Been Through a Lot: The Parable of the Dollar Bill

How To Feel The Love Of God For You

The Most Precious Gift